The flag of a country is the first tangible symbol representing her as a nation. A flag is not just a piece of fabric. It is an emblem of value, a defining piece of insignia with detailed designs which carries a great deal of information. Did you know about that nickname?

2. What the Initial Design of the Flag was

One thing you might not know about the Nigerian flag is that, Mr. Akinkumi’s original design was not the rectangular plain green and white. His original design included a blazing sun symbol on the white stripe in-between the green vertical stripes. This design was however modified. The blazing sun symbol in the middle was removed, leaving us with our now too familiar green-white-green

3. How Much the Designer Got Mr. Taiwo Akinkumi’s winning design did not go un-rewarded at the time. The Nigerian government gave him £100 ($281 in 1959) for winning the contest. ‘Chicken change abi?’ Now check this out; in 2008, he made an appearance on popular TV show who wants to be a millionaire and got rewarded with the sum of N2 million.

In October 2010, he received the award of being a distinguished Nigerian by the Goodluck Jonathan administration.

In 2014, President Goodluck Jonathan placed him on a lifetime salary of about N800,000 per month. I hear someone thinking “why dem no born me then…i for don design shege”…remember that there were over 2000 contestants then oh!

4. What the White Stripe in the Nigerian Flag Represents 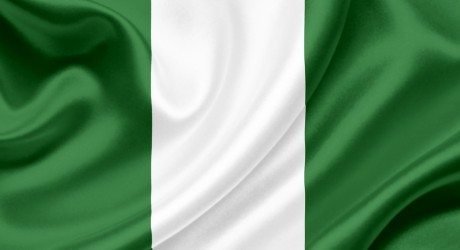 5. What the Green Stripes Represent Maybe if our flag was been designed today it might include a black stripe that represents crude oil. But, when Mr. Taiwo Akinkumi designed the Nigerian flag, the green stripes were meant to represent our rich agricultural heritage and the evergreen vegetation prevalent in Nigeria. Sadly, we Nigerians have to our detriment forsaken agriculture in search of white-collar-jobs.

6. What the measurement of the flag is

Many people do not know that there is a measurement showing dimensions for every Nigerian flag, be it big or small. Those who cut and sew flags anyhow should desist from such act. Below are the dimensions of a standard flag:

The above dimension shows that the flag is always rectangular in shape no matter the size. Also the vertical green, white and green stripes must be split into 3 equal parts.

7. How the flag should be treated The Nigerian flag is to be hoisted and flown ceremoniously in the morning at 6 am sharp. The flag can then be lowered by 6pm in the evening.

It is important to note that the flag does not sleep.

The Nigerian flag must never be hung lower than any other flag or insignia when being hung in a room. It should also be flown at peak of any hoist, except on rare occasions were there is a State funeral, national mourning or memorial.

The Nigerian flag must be treated with priority in any procession where flags are being displayed. It should never be laid out flat except on rare occasions, such as on a casket -permission from the government must first be obtained.

Worn out or torn flags should not be displayed, they should discarded with the utmost respect.

8. Who Should Mount the Flag on Vehicles Many Nigerians who mount the Nigerian flag on their vehicles simply do not know they are breaking a rule in their bid to show patriotism.

The Nigerian flag should only be mounted on the radiator cap or on the right fender of the vehicle chassis of special dignitaries such as listed below:

Now you know who should mount the Nigerian flag on vehicles.

9. The Law that Protects the Nigerian Flag The aforementioned rules on how to handle the flag are not just coming off the top of our heads. The flag is protected by a law in Nigeria.

Section 5 of the Coat-of-Arms and Flag Ordinance of 1960, makes it a punishable offence for the flag to be flown or displayed in defaced manner, either in torn, worn out or dirty. Anyone who displays or flies the flag in such manner is guilty of an offence. Usually, most of you guys think all flags are the same. Well, you might be right to an extent. However, the flags used by the President has the National coat of arms embroidered on the white stripe that runs in-between the two stripes of green.

So when next you see the President sit down to address the nation, look closely at the flag behind him. That’s a state flag!

Got any thoughts on the Nigerian flag? Why not share in the comments section!