Popular cleric in Oyo state, Akeugbagold has secured the release of his twins after they were abducted at gunpoint by some unknown men in his Ibadan.

Akeugbagold, who was the Chairman of the Oyo State Pilgrims Welfare Board, Muslim wing, during the administration of former Governor Abiola Ajimobi, announced their abduction of his 2-year-old twins on a Facebook post 8 days ago. 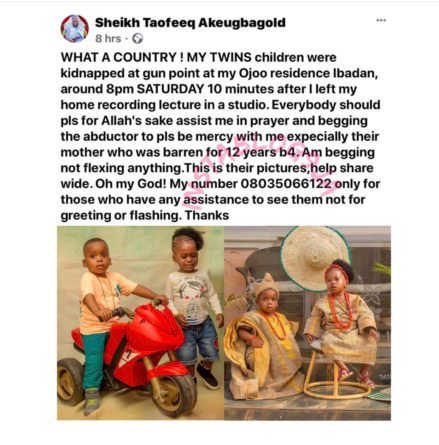 However, in a Facebook post the cleric posted this Sunday morning, he revealed his toddlers have been released.

He, however, didn’t mention whether a ransom was paid or not to secure their freedom.

“Alhamdulillah! At 5.30 am on Sunday, 3rd May, my abducted twin kids were released to me beside a bush after eight days in an unknown land. Thanks to you all for your prayers and support, Jazakumullahu khairan,” he wrote.

Funny: YouTubers, Handi and Wanni Twins Reveal What Their Sister Did To Them And Sir Dee