Peep peep…The final whistle has been blown and just like that, Germany have LOST their first World Cup game to Mexico. The German players look stunned. This is no joke; they actually lost this game. ‘Chucky’ Lozano’s goal was the difference on the day as he cut inside Mesut Ozil to score a goal that had been coming all match long. But as shocking as this result was, it certainly was no fluke.

Germany were complacent from the get-go; allowing Mexico too much time on the ball and they struggled to assert themselves in a game that demanded that they did so. The Mexicans were energetic and played with a lot of belief; so much that anything other than getting ahead was going to deflate their morale. Germany should have countered this by dealing a sucker-punch. Just look at what Denmark did to Peru…the South-Americans played most of the ball but once Poulsen scored, they lost their momentum and, eventually, the game.

But Mexico deserve every credit they get about this game. They were quick on and off the ball (the movement was amazing to watch at times) and they always seemed to have more than a few ways to attack the Germans. What struck me was their reluctance to just sit back and absorb pressure; they faced the challenge head-on, which is a dangerous thing to do against Germany (just ask the Brazilians). In the end, they were the better team, despite being the underdog in the contest…and it wasn’t only just them that impressed. 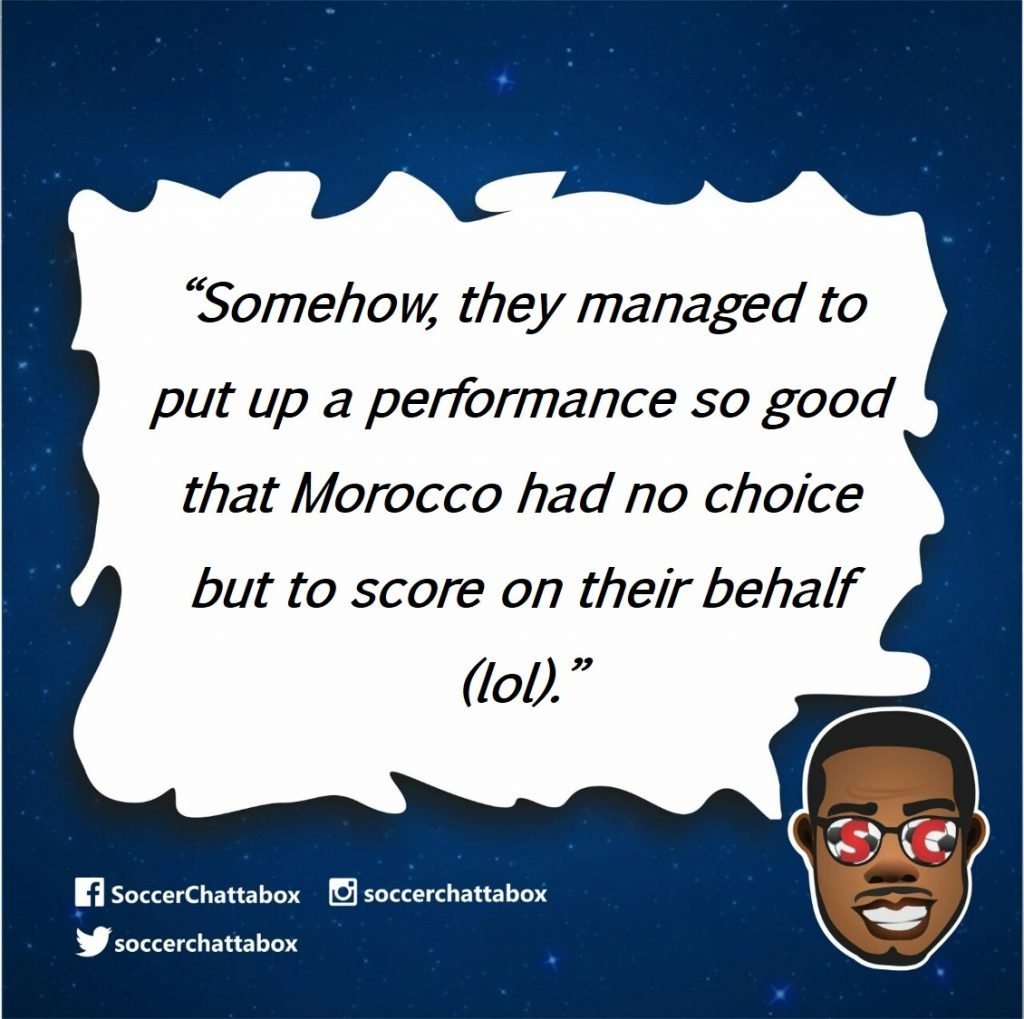 Iran walked into this tournament as my bet to ship in goals from the first day. Somehow, they managed to put up a performance so good that Morocco had no choice but to score on their behalf (lol). As it stands, they are TOP of a group that contains Spain and Portugal. May not last long though but I don’t think Iranians will care about that at the moment.

Argentina will be wishing they could replay the game against Iceland, but even if they could do that, the result would be the same: They wouldn’t win. Iceland gave those guys a run for their money. They played with so much ice in their veins; so much that Messi’s legs seemed frozen when he took that useless spot-kick. They kicked everything and everyone and somehow managed to find a goal in between all that. They will take a lot of confidence from the draw against Argentina so expect the game against Nigeria to feature fireworks.

Finally, I remember speaking with a friend about the upcoming Brazil-Switzerland game and he had only one outcome in his mind: Brazil would thrash Switzerland. I asked him to think about it before placing it on his ticket but his mind was made up. At the moment, he’s not picking my calls. I don’t know why he’s avoiding me. All I want to do is laugh at him; that’s all. Brazil clearly did not watch the Germany-Mexico game. If they did, they would have taken Switzerland more seriously. First of all, they took the lead in the most Brazil way possible. What a strike from Coutinho. Another contender for the Goal of the Tournament. But then a one-goal lead is one of the most fragile things in football and Switzerland always looked like they could score. In the end, they took advantage of some really slack defending by Brazil to score; Zuber with a wonderful header from a corner. The push on Miranda is irrelevant as the defender was already badly positioned. He won’t have done anything to stop that goal. Just like Argentina, Brazil will be wishing they could replay this. But just like the Argentina game, the outcome wouldn’t be different. Switzerland were good enough for the point.

So do we expect more of this? My hope is that we see more underdog triumphs but from the African teams. Tunisia and Senegal are the remaining candidates to make Africa proud in this opening round. I hope they come through and keep this fun going. If not, well…at least there was Mexico.

THE ANNOYING, SICK FEELING OF LOSING