The Chief of Staff (CoS) to the President, Abba Kyari is a talking point on social media.

This is due to an ongoing battle for supremacy between him and the National Security Adviser (NSA), Maj-Gen. Babagana Monguno (rtd).

In a circular from the Office of the NSA, which got into the public yesterday, Monguno accused the CoS of hijacking the coordination of security leadership of the country, a role legally assigned to his office.

This has reportedly led to confusion, lack of leadership and outright sidelining of Monguno in the scheme of things when it comes to the strategic decisions in national security operations.

It was gathered that Kyari in flagrant abuse of the protocols, convenes and chairs meetings with heads of defense, security, and intelligence agencies with their supervising Ministers in attendance.

The NSA, in a circular dated December 9, 2019, entitled: ‘Disruption of National Framework by Unwarranted Meddlesomeness,’ accused Kyari of usurping his powers and those of President Buhari.

Monguno, in the circular copied to Kyari, all Service, Intelligence and Security Chiefs, the Ministers of Defence, Foreign Affairs, Interior and Police Affairs, alleged that Kyari authored two circulars on September 13 and November 26, 2019, respectively, with contents and directives which were at variance with Buhari’s orders.

In the circular, Monguno pointed out that what Kyari is doing is an aberration as he is not in any position to preside over national security meetings nor competent enough to determine and manage the nation’s security architecture and trajectory.

READ: ‘Your Humiliation is Total’, FFK Mocks Osinbajo After Buhari Sacked His Aides

The NSA, therefore, warned Kyari to stop issuing orders on security matters and directed the complacent security and Intelligence Chiefs as well as the Ministers to follow the established line of authority in national security coordination by the President through the NSA.

See pictures of the circular below. 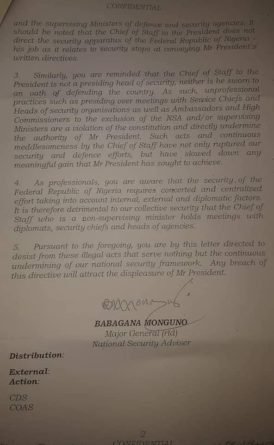 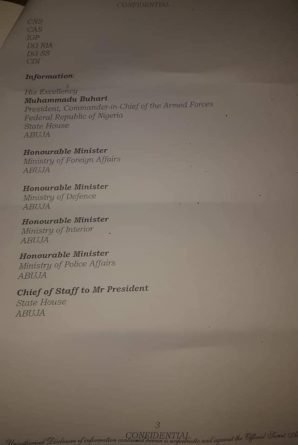 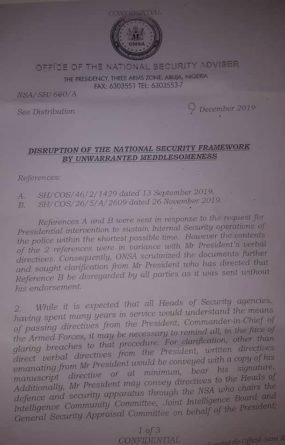 Presidency Explains Roles of SGF and Chief of Staff