Nigerian actor, Okon Lagos has been accused of lying about his weight loss by some Twitter users.

This was coming after the actor shared a picture of him before and after his weight loss journey. 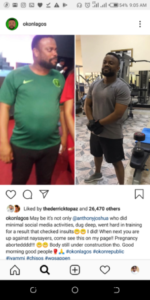 Celebrating him, a Twitter user, Ada Ugo posted that she’s proud of him.

However, some Twitter users claimed that the pictures are not true because they’ve seen him recently and doesn’t look like he’s lost so much weight.

“This can’t be true ooo… I saw this man early November in UniBen and he was still like that… How come he burned all those fat in a month… It will be cool if it’s true sha.”

Another Twitter user shared a picture of him as she explained that she saw him recently at a burial. 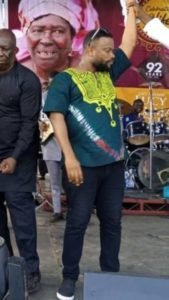 “I Have no reason to make this up. Late Madam Lucy Odili burial on Saturday. My friend who’s an MC was on stage with him, Charles Awurum etc. He posted a pic from this event on his IG yesterday too but it’s a facial picture of him and the rest ppl I posted now. He did lose considerable weight just not as drastic as the post he made suggests. I mean that’s him live on Saturday.”

I Have no reason to make this up. Late Madam Lucy Odili burial on Saturday. My friend who’s an MC was on stage with him, Charles Awurum etc. pic.twitter.com/lMU0JNvjFL

“Now You Know How It Feels,” – Lady Calls Out Ex-Queen of Iwo Land, Chanel Chin

“How We Unknowingly Bullied Our Friend To Death” – Man Narrates