Toyin Abraham’s ex husband, Adeniyi Johnson curses a troll who made an insensitive comment on a throwback picture with his girlfriend, Seyi Edun.

The actor shared a throwback picture with his girlfriend and captioned it:

“Epic throwback when were still casual friends before we started doing kini.”

A follower then commented, insinuating that his girlfriend is a maid who came to take the place of his first wife; Toyin Abraham.

In response, he wrote; “You don’t have to show your stupidity here o. Except what unsaid is true, of not you will be replaced.“ 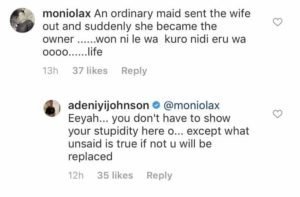 Tee-Y Mix’s Wife, Ivie Praises Him Hours After Their Wedding