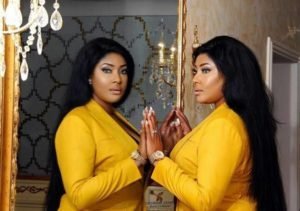 She wrote; “Please take out time today to pray for Nollywood actress Angela Okorie. She ran into armed men on December 12th on her way back from a show and they riddled her car with bullets. I hear she is in hospital but don’t know if she was seriously injured. I pray she is OK……Ya all stay woke and be watchful. ❤️?.

The blogger also shared a video of the car the actress was attacked in as seen below;

In an update to the news, the blogger revealed that 14 bullet pellets were allegedly removed from the actress’ hair. She also wrote that an insider informed her that the actress has left the hospital and is currently in shock.

She added; “she has left hospital and is in shock. An insider who spoke with her says she is laughing but appears in deep shock. Please tell us your story soon @realangelaokorie God loves you indeed!”

‘Don’t Forget Yourself While Building Your Man’ – Angela Okorie