Nigerian actress, Anita Joseph comes back at trolls who complained about her makeup-free face.

This was after the actress shared a video speaking in her tribal language, Igbo.

One person wrote; “After all the skincare you still have pimples and blackspots on your face.”

Another wrote; “you’re not fine without makeup.”

In response, Anita Joseph fired back saying; “I fine pass your female generation, both born and unborn.” 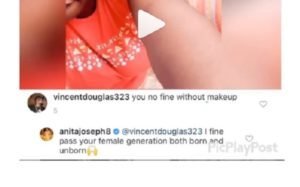 The actress also headlined the news few weeks ago after calling out her best friend, Uche Elendu on social media. She accused heer of being a terrible person and confirmed that their relationship is over.

Their fight allegedly started when her best friend who has her hair brand got angry that she (Anita Joseph) was influencing other people’s hair brands. According to her, ‘people would think her own brand is fake.

“Osas And I Have Finalized Our Divorce” – Gbenro Ajibade (Video)

‘If You Must Send Nudes To A Man, Ensure You Crop Your Face Out’ – Actress Damilola Adegbite Advises Women