Twitter user identified as @bougie_blackie discouraged men who earn 50k from getting married as it is ‘not proper’.

She also said people shouldn’t compare it to those that married long ago earning such amount as the economy isn’t the same as then.

Read Her Tweets Below:

“A guy earning 50k should not have any business getting married…it’s just not proper. And anyone that would say back in the days, some parents earned less and still managed to fend and send kids to school should ask themselves if the economy then was the same as it is now.

“A lot of you coming under this tweet to form faux woke would never allow your sisters marry someone who earns that amount and same with you females.

“But someone said it out loud, so go off!” She wrote. 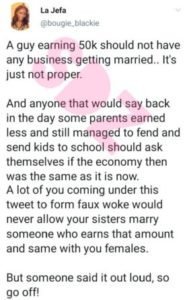 Toyin Abraham is Engaged, Not Married Yet – Manager