Ex BBNaija housemates, Tacha and Mercy are back at shading each other even after the end of the reality show.

In recent development, the BBNaija Pepper Dem winner, Mercy announced that she would be “back on the screen.”

And oh YES I’m coming back to your screen???? Are you ready for the real highlights ????

Many have assumed that she’s about starting her reality show as Tacha announced some weeks back about launching a reality show.

In reaction to this news, many of Tacha’s fans took to Twitter to trend the hashtag #Tachadiditfirst accusing Mercy of always “copying” her.

Tacha also acknowledged and supported this hashtag and shaded Mercy agreeing with her fans that she copied her concept. She also preached about originality and posted a quote by Robin Sharma talking about people copying what you do. 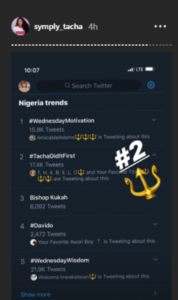 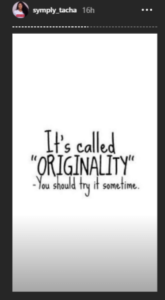 Mercy on the other hand quoted a Cardi B’s song, “Press”. She also wrote on her IG story; “Alexa play me pressed or obsession on 198.”

198 is the channel that airs BBNaija on DSTV. 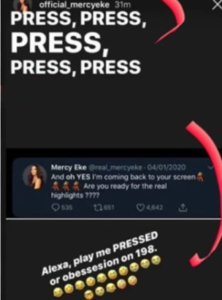