Elon Musk has shared tweets that have caused people to wonder if he’s okay.

The billionaire who is the CEO of SpaceX and the co-founder of Tesla, wrote on Twitter that he will be selling off almost all his physical possessions and will not even own a house.

He wrote: “I am selling almost all physical possessions. Will own no house.”

He added that he owns Gene Wilder’s old house and doesn’t want it to be torn down by anyone who’ll buy it.

He tweeted: “Just one stipulation on sale: I own Gene Wilder’s old house. It cannot be torn down or lose any its soul.” When a concerned follower asked if he’s doing it because he needs cash, he replied that isn’t the case.

“Are you doing it because you need the cash or is this to protest the world burning down?” The follower asked.

Elon Musk replied: “Don’t need the cash. Devoting myself to Mars and Earth. Possession just weigh you down.” 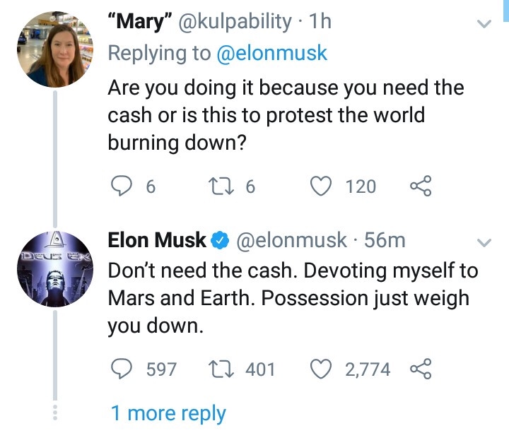 “You Are Part Of My Soul Forever” – Vanessa Bryant’s Writes Daughter, Gianna On Her 14th Posthumous Birthday

Man Condemns Segun Arinze Over Treatment Of His Houseboy (Video)