Olawale Ashimi popularly known as Brymo Olofooro is a Nigerian singer, songwriter, recording artiste and author. The versatile singer is one of the talented artists that have carved his place in the Nigerian music industry. His voice, melody and rhyme finds its way to the loneliest hearts. His music stands tall in the confines of providing therapy.

Early life and background of Brymo

Born May 9, 1986 in Okokomaiko, Ojo, Lagos state, to a carpenter father and trader mother who are of Awori and Egun ancestry respectively. Brymo was raised an only child in the suburb of Okokomaiko where he spent some time at an Islamic school. For his elementary education, he attended Aganju Aka and Japaul primary school. He enrolled at Lagos state university (LASU) to study zoology but he dropped out in his second year to pursue his music career.

As a child, Brymo was quite troublesome and got into lots of fights with other children in the neighbourhood. Unlike other artists who started singing from their early years, Brymo’s first love was football. He fell in love with music through the influence of his mother who was a fuji lover. 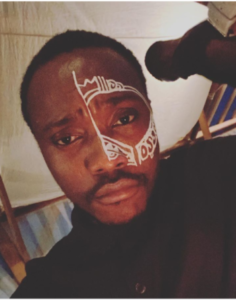 While still in secondary school, he released his first song “Future” in 1999. Three years later, Brymo and some of his friends formed a group called The Aliens.

In 2005, the group disbanded due to some crises and Brymo became a solo artist. He released his first debut studio album “Brymstone” in 2007. The album sold over 2000 copies within six months of its release. “Brymstone” didn’t get much attention and recognition as there were management and technical issues in publicising the album. Brymo didn’t relent as he saw it as a means to build his musical career. He got signed to Chocolate City record label in 2010.

Brymo came to limelight after featuring in Oleku, a hit single on Ice Prince’s debut studio album – Everybody Loves Ice Prince. The visuals garnered 3.2 million views on YouTube. Singer Brymo has successfully recorded eight wonderful studio albums, which were released between 2007 to 2018. Brymo released his second album lead single ‘Ara’ which was produced by Legendary Beats. His sophomore album ‘The Son of A Kapenta’ was released on November 15, 2012 with features from Jesse Jagz, Pryse, Efya, M.I. and Ice Prince.

On 16 April 2012, Brymo released “Good Morning” as the album’s second single. The album’s title “The Son of a Kapenta” was inspired by his father’s carpentry profession. It was a summary of his life and a reflection of his energy. The album was also a medium for him to be identified as a lead artist and not a featured artist. “The Son of a Kapenta” wasn’t a commercial success thus it was listed among “Albums that failed commercially in 2012” in The Nation Newspaper.

Brymo released his third studio album Merchants, Dealers & Slaves on 20 October 2013. The album was described as a “soulful masterpiece that is emotionally charged with amazing production”. Over the years, Brymo’s songs has been acclaimed to address societal ills, injustice, chaos in the political system as well as other societal challenges that are prevalent in the country. Brymo’s music is a mixture of fuji, R&B, pop and rock.

On October 2014, Brymo bagged an ambassadorial deal with Lagos Chamber of Commerce and Industry. The folk maestro released his fourth studio album titled “Tabula Rasa” on the 30th of October, 2014. The album’s lead single “Fe mi” was described as a soft traditional ballad. The controversial split from Chocolate City birthed the album. Brymo decided to name the album Tabula Rasa after hearing the judge used it in a speech. Tabula Rasa incorporates African folk and popular music. The album received a widespread positive review and several people termed it a classic.

Brymo signed an international record deal with American record label and publishing firm Tate Music Group. Under the label, he released eight-track compilation album titled Trance in December 8, 2015. The album was aimed at audiences in the U.S and contains songs from the albums Merchants, Dealers & Slaves and Tabula Rasa. Brymo described the album as a medley of thoughts based on his experiences. The album is a fusion of African folk, soul, pop, and afrobeat.

The singing sensation released his fifth studio album titled Klĭtôrĭs on May 9, 2016. The 11 track- album was preceded by the lead single “Happy Memories“. Brymo’s girlfriend Esse Kakada was featured on the song “Naked“. Klĭtôrĭs is a Greek word meaning Key. The album is an expression of love and the uncertainty of it. The album was listed by Pulse Nigeria as one of the 10 Best Nigerian Albums of 2016. He has had collaborations as well as featured on the works of M.I, Iceprince, Jesse Jagz, Ill Bliss, Sasha, 2 Shotz, Playboy, SARZ,

Brymo released his sixth studio album with a Yoruba title, Oso meaning Wizard on March 27, 2018. The 11 track album was was produced and mixed by Brymo’s frequent collaborator Mikky Me Joses. A day after the release of the album, Brymo released the music video for the lead single “Heya“, which caused lots of controversies on social media. The video featured Brymo exposing his buttocks while wearing a loincloth to hide his genitals. The “Ara” crooner defended his actions, saying,

“I decided to appear how my forebears dressed before the arrival of civilization to Nubian continent“.

The album debuted as the Best Nigerian album of 2018 on the 360 Nobs and Daily Trust newspaper listicle. It also ranked second on the Pulse Nigeria and Nigeria Entertainment Today listicle. In September 2018, Brymo released Oriri’s Plight, a self-referential fictional novel. It is centered around a young Nubian man of the Dark Ages. Brymo collaborated with three members of Skata Vibration to form A.A.A, an alternative rock band composed of himself, guitarist Jad Moukarim, drummer Adey Omotade, and bassist Laughter. The band released its eponymous debut EP on the 5th of August, 2019. The 5 track EP incorporates elements of African folk and psychedelic rock.

On April 1, 2020, Brymo’s seventh studio album Yellow was released. The album’s cover art and track list were unveiled in March 2020. The theme of the album is “Love and survival “. Yellow is a fusion of  sentimental ballad, trap, sophisti pop, shoegaze, rock, synth-pop and folk. Basically, the album addresses topics like love, heart break, socio-politics and mental health. Yellow spans three sides and was initially composed of 17 tracks: six were recorded in English, five in Nigerian Pidgin, five in Yoruba and one in Igbo. The album’s three sides were numbered in Arabic, Roman and English numerals, respectively.

The maestro is in a relationship with Esse Kakadare and they have a son, Waju who was born on 27 March 2015.

The singer has, however, garnered a few awards and recognitions since his 2007 debut album Brymstone.

He won the Recording of the Year award for the song ‘Ara’ at the Hip Hop World Awards in 2012. He also bagged the Most Gifted Afro Pop Video of the Year at the Channel O Music Video Awards same year.

He won the Songwriter of the Year award for the song ‘Down’ at the 2013/2014 All Africa Music Awards.

He was nominated in the Best Recording of the Year, Best Alternative Song, and Best Performer categories at the 2019 Headies.

Brymo is currently one of the richest and most influential artists in Nigeria with an estimated net worth of $ 3.9 million.

IG Live: “I Have a 10-Year-Old Son Who Plays With His Mom’s Phone”- Rapper, Ice Prince Cries Out