Hadiza Salma Blell professionally known as Di’Ja or Aphrodija is a Sierra Leonean Nigerian singer, song-writer, visual artist, recording artist and humanitarian. She is currently signed to Mavin Records. She is one of Nigeria’s music diva whose single “aww” got accepted by a lot of hip-hop fans in Nigeria and Africa. The single topped so many charts as her fan base increased.

Early life and background of Di’Ja

Di’Ja was born on 14th August 1989 in Kaduna State in the northern part of Nigeria. She is of a Nigerian and Sierra Leone descent, having a Nigerian mother and a Sierra Leonian/Lebanese father. She is from a well-to-do family as her father was once a minister in his country. Di’Ja is a multilinguist and have lived in Nigeria, Sierra Leone, the United States, and Canada. Di’ja is very fluent in the Hausa language and also very good in the Krio language. Her name, Di’ja is a combination of two words, Hadiza and Khadijah. She has a double degree in Psychology and Biology. After earning the aforementioned degrees, Di’Ja became passionate about music, art, and philosophy. Her professional music career began when a friend, Aman Manhas, signed her up for a singing competition in Canada, called the Beat Music Awards. She never looked back since. Di’ja began her music career in 2008. The same year, she released her first single titled Rock Steady. The song earned her a nomination for the Canadian Radio Music Award in 2009. It also earned her a production deal with the international outfit, RockSTAR Music Corporation.

In 2012, Di’Ja released several singles, including “Dan’Iska (Rudebwoy)”, “Hold On (Ba Damuwa)” and “How Can We Be Friends”. She was in Canada when she released these songs. She met Don Jazzy through her manager. After undergoing training, she was officially endorsed into the Mavin Records in 2014. She was signed along side Korede Bello and Reekado Banks on 14th February, 2014. “Yaro”, her first official single under the label was also released that same day. It infuses Hausa and Krio dialects in honour of her Nigerian and Sierra Leonean roots.

In May 2014, Di’Ja was featured on “Dorobucci” alongside label mates Don Jazzy, Dr SID, Tiwa Savage, D’Prince, Korede Bello and Reekado Banks. In May 2014, an animated video was released for “Dorobucci”. As of 21 June 2014, “Dorobucci” has received over 12 million downloads since its release. Di’Ja was also featured on “Arise” alongside Don Jazzy and Reekado Banks. In December 2014, she released her biggest hit single so far “Awww“. The single is ranked among the top hit singles of 2015 and the video have gained a lot of views on YouTube. She was featured alongside other mavin crew in hit songs like; Adaobi, as well as Looku Looku.

Di’Ja is known for her interest in progressive discourses and socio-political issues.

Di’Ja got married to her husband, Rotimi in 2015. The marriage came as a surprise as people were oblivious of her relationship. The union is blessed with three children. The talented singer continues to keep her family out of the limelight, however. 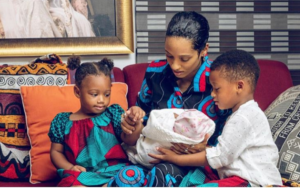 In 2019, Di’ja was awarded by the Nigerian Red Cross Society for her humanitarian service under the ichange Foundation.

She was nominated for Most Promising Act to Watch out for at Nigerian Entertainment Awards, 2014.

According to online sources, Di’Ja’s net worth is estimated at $400,000. She is an ambassador of Globacom.