Adewale Mayowa Emmanuel popularly known as Mayorkun is a fast rising Nigerian singer, songwriter and recording artiste. He is signed to Davido Music Worldwide (DMW) record label. He rose to stardom with his hit single “Eleko“. The emerging artist with non-relenting spirit and passion for music is fast dominating the music scene in Nigeria.

Early life and background of Mayorkun

Born March 23, 1994 in Osun State into a family of entertainers, Mayorkun is the first child of three. His mother, Mrs Toyin Adewale is a popular Yoruba actress while his father is an artist and movie producer. While growing up, he joined the choir where he learnt the ropes of music. Mayorkun had his early education at the Living Spring Montessori and then proceeded to High Grade College for his secondary education. He bagged a degree in accounting from the University of Lagos and was working in the banking sector before he embraced music fully. He started music professionally in 2013. His father was in support of his musical career but his mother was sceptical about him quitting his banking job for music. Everything changed when his mother found out about Davido’s invitation to join Davido Music Worldwide Music Label. After this she agreed that he may try to find himself in this sphere.

His career bloomed when Davido spotted one of his cover video in February 2016. Mayorkun got signed to Davido Music Worldwide same day he rendered his resignation letter at the bank. He released his first single “Eleko” under the label in 2016. The video of the song gathered a million views in the first 10 days. Mayorkun had several singles to his name, including Yawa, Sade, Che Che, and Mama. In anticipation of his first studio album titled  “The Mayor of Lagos“, he released the singles “Posh” and “Fantasy” featuring Olu Maintain in October 2018. The Mayor of Lagos was released on the 16th of November 2018. On December 1, 2018, it topped on the Billboard World Albums chart at number 15.

In 2017, Mayorkun embarked on a nationwide tour, performing in over 35 schools. He had his first headline concert in Lagos called “The Mayor of Lagos“. He’s held concerts in Ibadan and Abuja. In 2018, Mayorkun toured UK alongside label mate Dremo, where he performed in about six cities. 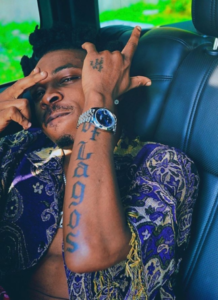 Mayorkun had collaborated with prominent artists like Vector, M. I Abaga, Ycee amongst others.

He’s currently single. Though he has girls flocking around him, he’s decided to keep his relationship with women on fan-artist level.

Mayorkun in the cause of his career as a musician have won several awards. In 2016, he won the Most Promising Act of the Year, Song of the Year and Best New Talent all at the City People Entertainment Awards. He also won the Rookie of the Year Award at the Headies and Hip TV Awards.

According to online sources, Mayorkun’s net worth is estimated to be $120,000 dollars.