Mr Eazi is a Nigerian born, Ghana-based award-winning singer, songwriter and entrepreneur. His music is a fusion of Afro beats and R&B. He pioneered Banku music, a blend of Ghanaian highlife and Nigerian chord progressions and patterns.

Born Oluwatosin Ajibade on the 19th July, 1991 in Port Harcourt, Rivers State. He’s from an entrepreneurial family. His father is a pilot and owns an aviation consulting firm while his mother owned a small business.
Mr Eazi had his primary and secondary education in Lagos before proceeding to Kwame Nkrumah University of Science and Technology (KNUST) in Ghana to study Mechanical engineering at age 16.

He had always have flair for music growing up. His music career blossomed while he was still in school. He rose to prominence after featuring as a guest vocalist on the track “My Life“, which made him famous in KNUST. Prior to that, he founded party and promotion company called Swagger Entertainment. He used this platform to book shows and promote events on the campus of KNUST.
At 23, Mr Eazi moved back to Nigeria and opened an e-commerce company and worked with Schlumberger for a short while. As an entrepreneur, the popular artist ventured into several businesses including the importation of soft drinks, gold mining, and food distribution. 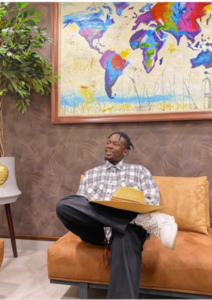 In July 2013, Mr Eazi released his 13-track debut mixtape “About to Blow”.
In November 2014, Mr Eazi released his second mixtape single – Bankulize. DJ Juls produced the song, and it featured vocals from the Ghanaian hiplife artist – Pappy Kojo. In February 2016, Mr Eazi was disqualified from the Ghana music awards on grounds of nationality. Nonetheless, that same year he got signed with the Starboy Worldwide record label.

In 17 June 2016, Mr Eazi released the R&B-inspired “Anointing“, a song that features rap vocals from Ghanaian rapper Sarkodie. The official remix of Bankulize was released in September 2016, and featured Burna Boy. He gained international recognition on releasing his single Skin Tight featuring Efya in August 2015. In August 2016, Nigerian record producer Cobhams Asuquo released a rendition of the song. DJ Caise released a house remix of the song in September 2016, while Terry G collaborated with Mr Eazi to release a remix of the song. The skin tight crooner got featured on Eugy’s 2016 hit single “Dance for Me “. He released his second mixtape Life Is Eazi, Vol. 1 – Accra To Lagos, on the 10th of February 2017. It  debuted at number 4 on the Billboard World Albums chart. 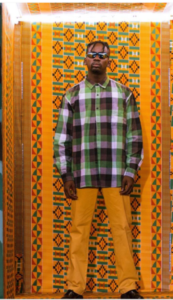 On 11 January 2017, the singer was heavily backlashed for insinuating that Nigerian music is heavily influenced by Ghanaian music. Mr Eazi’s postulation, which was shared on Twitter, immediately went viral both in Nigeria and Ghana, attracting fierce attack on the musician. The backlash saw him render an apology to Nigerians the following day. In April 2017, vodka brand “Ciroc” featured skin tight in an ad.

In 2018, he released his third debut studio album “Life Is Eazi, Vol 2 – Lagos To London”. In March 2018, several outlets reported that Mr Eazi signed a record deal contract with Diplo’s label “Mad Decent”. Mr Eazi signed a licensing deal with Universal Africa, a subsidiary of Universal Music Group. His music has been compared to that of Beres Hammond and Gregory Isaacs.

Mr Eazi was one of the performing artists at the 2019 Coachella Valley Music and Arts Festival. He was among the top African artists who attended the Vanity Fair Oscar party in March 2018. The singer was seen together with celebrities like Tyler Perry, rapper Drake, and American rapper Sean Combs, popularly known by his stage name Diddy. The singer is in a relationship with Temi Otedola, daughter of Nigerian billionaire, Femi Otedola and sister to DJ Cuppy. They’ve been dating for three years now.

Mr Eazi in the cause of his career as a musician has won several awards.
Best New Artiste at the Soundcity MVP Awards – 2016

Nominated for Viewer’s Choice at the Soundcity MVP Awards – 2016

Most Promising Act to Watch at the Nigeria Entertainment Awards – 2016

Nominated as the Best African Act at the MOBO Awards – 2017

Mr Eazi is currently one of the richest and most influential artist in Nigeria with an estimated net worth of $1.9million.