Olanrewaju Ogunmefun popularly known as Vector tha rapper is a Nigerian hip hop rapper, recording artiste and songwriter. He is one of the celebrated artistes who has marked their name on the African hip hop map. Vector’s ability to freestyle has endeared him to many hearts and made him win several awards. He is the voice behind the Sprite commercial that aired in 2009 and co-hosted The Future Awards alongside Toke Makinwa in 2013.

Early life and background of Vector

Vector was born on the 7th of August, 1984 in Lagos, Nigeria as the fourth of five children. The Ogun state descent had his elementary and high school education at Command children school, Ijebu Ode Grammar School, Government College Victoria Island & Saint Gregory’s College Ikoyi Lagos respectively. He graduated with a bachelor’s degree in Philosophy from the University of Lagos in 2008 and had his National Youth Service Corp (NYSC) in Eastern Nigeria precisely, Abakaliki, Ebonyi state.

His interest in music started far back 1994 when he was in secondary school. While schooling in St. Gregory’s College, he was involved in various social activities in which he was made to perform on the stage. He later went on to form a music group called ‘Badder Boiz’ with his friends, Krystal and Blaze; however in 2004 Krystal left the group.

The name Vector tha Viper came about as a result of his knowledge of Biology and Physics. When asked in an interview how he came about the name- Vector Tha Viper. He revealed:

Lol… Physics and Biology classes in Saint Gregory’s College. Vector is from science; Physics to be precise. I just came across the word ‘Vector’, and for some funny reasons, it just stayed. I always knew about vectors, but one day, when we were in class and the teacher explained it, it just stuck. I did some more findings and I realised there were vectors in Biology, Mathematics and English. I told myself that since the element is everywhere, the name could very well be ascribed to me, since I was an all-rounder. Viper, on the other hand, is a symbol of the poison of music in my veins.

Vector released his first official single “Kilode” for the album State of Surprise in February 2010. He went ahead to release the visual for the single in June 2010. In April of the same year, he released his second official single “Mary Jane”. His debut album titled “State of Surprise” was released on 29 October, 2010.  It featured 2 Face Idibia, General Pype, Chuddy K, Ade Piper, Emmsong, Sista Soul.

In June 2011, Vector released a video for the song “Get Down” featuring 2Face Idibia. His singles “Angeli” ft. 9ice and “Mr. Vector” featuring Jazzy, both produced by Sagzy were released on 19 May 2011. The critically acclaimed singles were massively airplay  on radio stations around the country. The rap god whose technique has been compared to the likes of American rapper Jay-Z has gone ahead to release hit songs like King Kong, Kanawan Dabo, Born leader amongst others. He has worked with several Nigerian artistes. In anticipation of his second studio album, he released a mixtape titled Bar Racks. “Lafiaji” was released in December 2016. He also released a mixtape in October 2018, “The Rap Dialogue” in an effort to keep the spirit of Nigerian hip-hop alive. 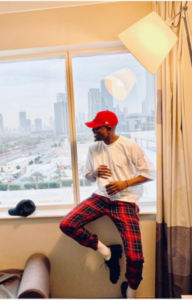 He collaborated with Maye Hunta on the theme song for Endemol/MNet’s BigBrother Africa Allstars held in South Africa. Vector Tha rapper was formerly signed to YSG Entertainment. Due to irreconcilable differences, he left the record label on September 13, 2013. He proceeded to establish his own record label, G.R.A.P music in 2015.

Four years after his third album, Lafiaji, he released the 10-track vibes before T.E.S.L.I.M: The Journey To Self-Discovery. It is a precursor to his fifth album, T.E.S.L.I.M. The album was released on November 29, 2019 – two months after it was initially set to drop as an EP. The album centres on love, relationships, downside of vices and response to haters. it is the most introspective, cohesive and balanced work Vector has released yet.

Aside his rapping prowess, Vector tha viper is also brand ambassadors for Vitafoam, Hennessy and Lagos State Chamber of Commerce.

The award-winning rapper hasn’t been completely free from controversy.
He’s had open beef with another Nigerian rap act, Reminisce. They both released diss tracks attacking each other. He is presently in a rap supremacy battle with Jude “M.I” Abaga, and has released diss tracks such as “The Purge” (featuring Vader and Paper) and also #JudasTheRat which was a response to M.I’s #ThaViper.

Not much is known about his love life. The “Adura” crooner has always kept his personal life private. He was once reported to be dating one Gbemisola. Recently, it was discovered that he has a three year old daughter with his baby mama.

He has won several awards and earned lots of nominations to his name.
Won

The Headies 2015 – Lyricist on the Roll, Best Rap Single

The Headies 2012 – Lyricist On The Roll, Best Rap Single

According to online sources, Vector is ranked amongst the richest and influential hip hop rapper with a net worth ranging between $1 million – $5 million.

Vector Agrees To A ‘Rap Battle’ Against MI Abaga For N40million

“My Fellow Celebs Don’t Like Me” – MI Abaga Confirms

“Shouting in Church, Believing God Would Hear You First Is Selfish” – Vector