Oluwatobi Wande Ojosipe popularly known by his stage name Wande Coal is a Nigerian singer, songwriter and recording artiste. His musical genre is R&B and Afropop. The award-winning singer sure knows how to captivate his listeners with his smooth, silky voice.

Wande Coal was born on October 18, 1985 in Lagos Island, Lagos state, Nigeria to Chief Ibukun Olufunto and Omolara Oluwayemisi Ojosipe, as the first of two children. For his primary education, he attended Staff Nursery and Ijaniki Primary School. He also attended Federal Government College, Lagos for his secondary education. He bagged a degree in Curriculum studies from the University of Lagos (Unilag).

Unlike many artiste who came into the music scene with their singing skills, Wande Coal stormed the music industry as a talented dancer. As a child, he sang in his church choir. He met D’banj and Don Jazzy during his undergraduate days and this encounter plunged him into the music scene. He got to be one of D’banj’s dancers, and backup singer before he eventually became a music artist. In 2006, he got signed as an artiste on Don Jazzy’s Mo’Hits Records. His first single “Ololufe” is described as one of the greatest love songs ever written by a Nigerian.
Later, he released his debut album Mushin To Mo’Hits which gained international recognition and acceptance. Wande Coal has worked with Nigerian artistes like Naeto C, Dr SID, D’Prince, Wizkid, Ikechukwu  and many other artists. Following a fallout between record label Executives Don Jazzy and D’banj, Wande Coal left the record label in 2013.

The “Ololufe” crooner released his debut single titled: Baby Face in October 2013. After a long break from music, Wande Coal released his second studio album Wanted. Most reviews of his second studio album “Wanted” placed him on a slightly above average scale. Wande Coal released another single Turkey Nla in December 2017, and So Mi So in 2018 under his independent record label, Black Diamond entertainment. He has released some notable singles under his label. 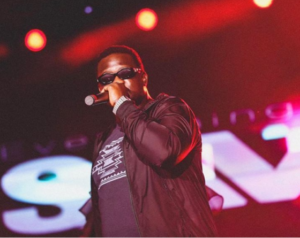 In 2018, Wande Coal was enmeshed in a baby mama scandal. He was said to have a fling with a lady called Temitope Ogunnusi. She got pregnant for the singer and hid the pregnancy from him until she gave birth to their son who has a striking resemblance with the singer. False allegations were levelled against him by his baby mama. She accused him of abducting her child and denying her access to him. He has since denied the report.

According to some sources, he’s reported to be married to one of his girlfriends around November 2017 in Lagos. Wande Coal hasn’t come out to refute the claims.

Song of the Year at the Dynamix Youth awards – 2009

African Artiste of the Year at the Ghana Music Awards – 2010

Artiste of the Year at the Hip Hop World Awards – 2010

Outstanding Performance in the music industry by City People – 2010

Nominated for Best Pop Single at The Headies – 2018

Wande Coal in the course of his music career has amassed a net worth of $1.7 million.