A British landlord has denied a Gambian student from viewing a house for rent because “all house smell when Nigerians cook.”

As reported by The Sun, Ebrima Mboob, who schools in the UK, arranged to view a double room in central London from landlord Elina Vimbsone.

They already agreed on a time, however, after the landlord viewed his profile and found out he’s African she told him he wouldn’t be viewing anymore because the rooms are available  “only for European people.”

In explanation, the landlord said; “We are not racist or smt just to be honest, I have friends from Nigeria and all house smell what they cook.” 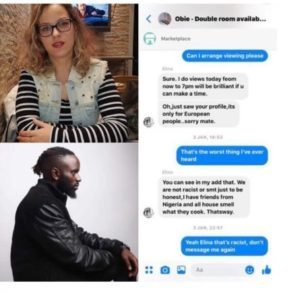 #SurvivingPeruzzi: Peruzzi’s Former Boss Calls Him Out Over Breach Of Contract, Reveals How He’s Once Ambushed Him

How To Make the Best Nigerian Chin Chin