His album, ‘African Giant’ was nominated under the category of ‘Best World Music Album.” 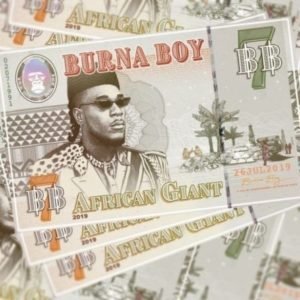 Many have reacted excitedly to the news including Wizkid who wrote;

See other reactions below;

Burna Boy bragged and called himself an #AfricanGiant

We rebelled and dragged him !!!!

Apple Music's Up Next Artist.

I stan a legend!

Burna Boy just got nominated for the #GRAMMYs pic.twitter.com/ZNb6q0LvFL

Now I'm gonna switch this to, Burna is winning it . https://t.co/AmZU1mJ45f

The Lord surely does have a sense of humour, Burna just got nominated for a Grammy.

Also in recent news: Burna Boy was withdrew by the organizers from performing at the Africans Unite Concert. This came after AKA demanded an apology and some South Africans ‘protested’ against him coming over his statement during xenophobic attacks.

Rapper AKA Demands Apology From Burna Boy As He’s Set To Perform In S. Africa

‘Who Is AKA’ – Nigerians Drag South African Rapper, AKA