Nigerian beauty entrepreneur, Nwanneka Nkumah popularly known as Mizwanneka was a victim of police assault last night and is currently in the hospital.

The entrepreneur narrated that she was on her way home when a police stopped her. He asked to search her car and she obliged. The issue started when the police tried to forcefully open a compartment in the car and she told him to use the button instead of forcing it open.

He started shouting, cursing and in fear tried to reach her phone. He tried to take the phone from her and she put in her skirt. Surprisingly, the police reached into her skirt to get the phone.

Soon 2 more policemen came and started pushing/assaulting her, in the middle of the struggle, they broke 3 of her nails which started bleeding.

She called on the appropriate authority to see into the case and arrest the culprits. 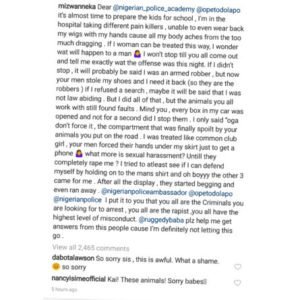