It all started when Uche Ogbodo uploaded a picture of herself with Uche Elendu and Halima Abubakar. She tagged them as her friends who keep it real.

However, Cossy Ojiakor who seemed to have a previous beef with Halima immediately reacted. She said Uche Elendu is indeed ‘super dope’ but Halima Abubakar is a snake. She begged Uche Ogbodo to stay away from her.

She then went on to her Instagram page to narrate what went on with her and Halima Abubakar and why she’s a snake.

The actress revealed Halima was the mastermind behind the rumours that she slept with a dog. 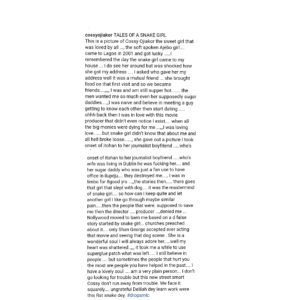 “TALES OF A SNAKE GIRL
“This is a picture of Cossy Ojiakor the sweet girl that was loved by all …, the soft spoken Ajebo girl…. came to Lagos in 2001 and got lucky …..I remembered the day the snake girl came to my house … I do see her around but was shocked how she got my address.

“I asked who gave her my address well it was a mutual friend … she brought food on that first visit and so we became friends….,,,,, I was and am still supper hot……. the men wanted me so much even her supposedly sugar daddies.

“I was naive and believe in meeting a guy getting to know each other then start dating ….. ohhh back then I was in love with this movie producer that didn’t even notice I exist…. when all the big monies were dying for me .

“I was loving love…….but snake girl didn’t know that about me and all hell broke loose……, she gave out a picture I took onset of itohan to her journalist boyfriend …..who’s wife was living in Dublin he was fucking her…. and her sugar daddy who was just a fan use to have office in ilupeju…. they destroyed me…., I was in limbo for 8good yrs …,,the stories then….. there goes that girl that slept with dog…. it was the mastermind of snake girl…. so how can I keep quite and let another girl I like go through maybe similar pain…..then the people that were. supposed to save me then the director …. producer denied me …

“Nollywood moved to ban me based on a d false story started by snake girl… churches preached about it…. only Shan George accepted ever acting that movie and seeing that dog scene . She is a wonderful soul I will always adore her…..well my heart was shattered..,,,, it took me a while to use superglue patch what was left….. I still believe in people …. but sometimes the people that hurt you the most are people you have helped in the past.

“I have a lovely soul …. am a very plain person… I don’t go looking for trouble but this new street smart Cossy don’t run away from trouble. We face it squarely…. ungrateful Delilah dey learn work were this Rat snake dey.”