Chelsea’s fortune took a turn for the better when the club was acquired by the Russian billionaire, Roman Abramovich. Prior to this time though, Chelsea has been a great club. We’ll be taking a look at some of the players who have contributed to making Chelsea what it is today. We’ll be looking at Ten Chelsea all time top scorers.

This man is a Chelsea legend by all standards. And it is quite surprising that as a midfielder he has the highest number of goals for Chelsea football club. He also has the record for the highest number of league appearances with 164 appearances, and also most FA cup goals with 26 goals. Frank Lampard has scored more penalties than any Chelsea player, more premier leagues goals overall and also the most premier league goals in a season. He joined Chelsea from West Ham in 2001 and left in 2014, in that time he was able to amass 212 goals overall from 648 appearances.

With 202 goals, the great Bobby Tambling comes in at #2 on our list of Chelsea All Time Top Scorers.  The striker made his senior debut for Chelsea at the age of 17 where he’ll become Chelsea’s highest goal scorer. He held this record for until 2013 when Lampard would break the record. Tambling played for Chelsea from 1959 up until 1970. He left to join Crystal Palace and then he played for Irish teams. Tambling still has the highest number of goals in league games for a Chelsea player.

Kerry Dixon joined Chelsea in 1983 from Reading and played there (in Chelsea) until 1992 before he then left and played for some other clubs.  Kerry Dixon was precise in front of goal, he was dangerous both in the air and on his two feet. And he was also very fast, with these qualities he helped Chelsea achieve their promotion to division one, their first promotion in five years.  Kerry Dixon retired during the 1997-1998 season. At the time of this retirement, he had scored a total of 231 goals in 593 matches. 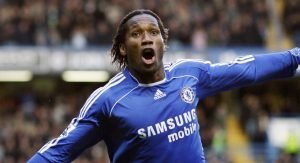 He’s been called the king of Stamford Bridge, and rightly so. At his peak, he had single-handedly given Chelsea a win in many matches. Due to his size and power, he was a scare to many defenders. A lot of times, all he needed was a long overhead pass, which Terry or Lampard always saw to that he had, and he would convert. Drogba could be counted upon to score goals even when the team was performing badly. He holds the record of scoring the highest number of FA cup goals and also the most European goals for a Chelsea player, having scored a total of 36 goals.

Number 5 on our list of Chelsea All time top scorers is Roy Bentley. He was born in England in 1924 and joined Chelsea in 1948 where he was captain of the League Championship winning team for the 1954-1955 seasons. This was Chelsea’s first League Championship Trophy. Throughout Bentley’s time at Chelsea, he led the scoring charts; he was also the first Chelsea player to play for England. By the time he was leaving Chelsea he had played in 367 matches and scored 150 goals. This name is popular amongst Chelsea fans, especially older ones; he is a legend and was rightly dubbed “King of Stamford Bridge”. Peter Osgood joined Chelsea from the youth team and would grow through the ranks. He was part of the team that won Chelsea’s FA cup trophy in 1970. However, Osgood’s success in Chelsea did not translate to success for the English national team. He played just for matches for the 3 lions, 3 out of those were as a substitute.  At the time he left Chelsea he had scored 150 goals and appeared in 380 matches.

Jimmy Greaves is more of a Tottenham legend than a Chelsea legend. He played for the two clubs though, but he spent more time at White Hart Lane than at Stamford Bridge. James Peter Greaves was born in Essex, England. He started his professional football career playing for Chelsea. He was part of the English team that won the 1966 world cup and is also England’s fourth international highest goal scorer.  Greaves is also Tottenham’s highest goal scorer of all times. However, he is no 7 on Chelsea’s all time highest goal scorer list.

George Mills was a striker and he spent most of his footballing time at the Stamford Bridge, playing for Chelsea. He joined Chelsea in 1929, and in his time at Chelsea, he became the first player at Stamford Bridge to score 100 goals. This is a testament to his goal scoring ability, he was also the last Chelsea player to score a hat-trick against Liverpool. George Mills died in 1970 at the age of 61.

George “Gatlin Gun” Hisdon joined Chelsea in 1906, due to his prolixity in front of goal he was nicknamed “gatling gun”, imitating the sound of a machine gun. He was the first Chelsea player to hit 100 goals, and it took him six years to do this. The striker’s career was cut short though as he had to go fight in the First World War. At the end of the war, he couldn’t continue playing due to a lung infection. Hilsdon died in 1941, he died a Chelsea legend.

Barry Bridges was born the same year George Hilsdon died, this was in 1941. He played at the Bridge from 1958 to 1966. Bridges was a very pacy player, he happened to be a high school sprint champ, so this doesn’t come as a surprise. After playing for Chelsea, he also played for Birmingham, Queens Park Rangers, Milwall and Brighton. At his time of leaving Chelsea, the striker had played in 205 matches and had 93 goals.

Rudiger Back In Contention For Game Against Lille