Nigerian singer, Davido has finally arrested the two girls who accused him of impregnating one of them. The singer shared a picture of the two girls in handcuffs and captioned it; “first to do no dey pain.” 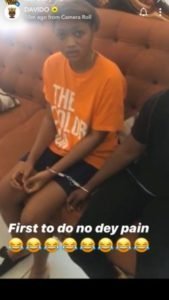 Also, a video of the two handcuffed has surfaced online.

The two girls, Susan and Helen made a video accusing the singer of impregnating one of them and refusing to pick his calls. They also insulted him and involved his fiancée, Chioma in their allegations.

Davido called them out afterwards promising to get them arrested. The two girls then made a video stating that they were just playing a prank.

See reactions to the current situation;

Davido did this one for the culture, chasing clout can land you in jail. Be guided on these streets. pic.twitter.com/4Rd6CI2JiX

You guys said Davido used them to to promote Risky video lmao , they should continue the promotion in jail na. pic.twitter.com/WKkN8sAehH

Remember those girls that called Davido all kind of names and later tagged it a "prank"?
Well "there's a caught" ??? pic.twitter.com/SVee40oWok