Davido was seen in a video promoting an event for COZA, a church headed by Pastor Biodun Fatoyinbo who was accused of rape by Busola Dakolo.

Many has reacted to the video and most are disappointed that Davido chose to associate himself with Pastor Biodun Fatoyinbo and his church.

However, the singer has released a statement saying that the video was doctored.

He wrote that he did a video for the little girl in the video as he was told it’s for a competition. However, he wasn’t informed it would be used for the church’s ad.

He also warned the church to take down the video immediately as it’s ‘fraudulent and extremely disrespectful.’

See His Statement Below: 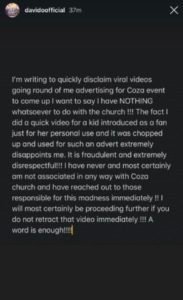