Last week, the sensational Nigerian music star fulfilled his promise to a boy who he had promised 1 million at the Davido live in concert. The young man protect some ladies from harassment in the said concert an was promised a reward by the artiste.

However, just few days ago, the young man made an open cry to Davido. He complained that the man, Lati, who was asked by the superstar to deliver the 1million naira to him had refused to pick his calls. He lamented that Lati had most likely absconded with the money.

On hearing his pleas via social media, Davido fulfilled his promise and handed over the cash to the boy.

The boy has gone on to purchase a Keke Napep with the money. Davido took to Instagram to express his excitement about the news. OBO impressed by the news said it was a nice investment and was in contrast to what he had thought – that he would lavish the money. 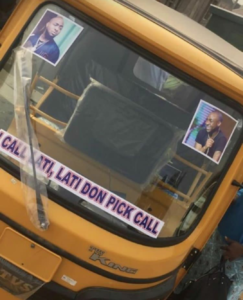 OAP Suave shared a photo of the Keke and called out those who expressed their fears that the money would be wasted on frivolities. He said the boy made a wise choice. He added that the boy could go on to make 5k a day amounting to 100k a year.

The music star isn’t a stranger to fulfilling promises or making such promises in the first place. In August, the superstar requested his followers to paste their account numbers to collect their ‘Aza’. He then picked a girl (Wendy) at random and gifted her the money.

Wendy took to her Instagram to thank the IF crooner for the kind gesture shown to her.

Davido Buys Imade A Bicycle As She Graduates From Kindergarten (Photos)