It’s been less than a week since your time at Arsenal ran out, and while I only want the best for the football club, it kinda hurts that it didn’t work out for you. A lot of people will roast me for that last statement but the truth is that I really wish things worked out differently.

I remember July 2018 like it was yesterday. Story broke out that you gatecrashed the interview process to replace Arsene Wenger. Story stated how you made this elaborate presentation to the board about how you could take Arsenal forward and how you would develop each player. I was excited because your pedigree was not in doubt. How could it be? 3 consecutive Europa League titles with Sevilla, along with a constant fight to be ‘the best of the rest’ in the La Liga speaks for itself. Okay…your spell at PSG would have raised doubts but hey…I think you were unlucky in your time there to be honest.

At the start, I wondered what the team would be like under you. You spoke a lot about promoting the younger players, pressing at key areas of the pitch, being organized when defending, as well as dominating games on a regular basis. For me, that sounded good. That’s the Arsenal I want to see, you know? Wengerball 2.0. I looked forward to that.

You did some good things at the club; the 22-game unbeaten run, making the Europa League final, Aubameyang winning the PL Golden Boot, and that stunning win over Tottenham (so good every time we beat them) were encouraging signs that your plan was close to fruition. The embarrassing Europa League final loss to Chelsea didn’t change that for me. 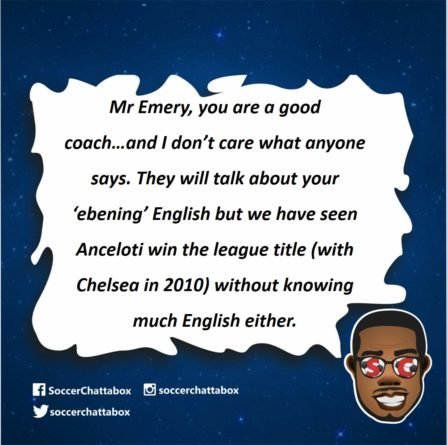 Mr Emery. I am only going to hold 3 things against you. Just 3. First of all, I will never understand how you could not make it work with Ozil. He should have been your closest ally in the team. On his day, he’s one of the best playmakers on the planet, capable of creating many moments of magic for the team. I understand the plan of promoting youth but regularly starting Saka ahead of Ozil baffled me. Another thing is the Xhaka situation. While others were on his back after every game, you should have been more vocal about your support for him. You should have helped him, and spoken to him more. You might have done all these things but I feel you could have handled him better. He’s a strong character but he’s also human who can crack under pressure. Allowing the team to vote him as captain was not a mistake; many teams have done it in the past. If you handled Xhaka better, he might have not lashed out the way he did the other day and he would still be the captain. Even after he lashed out at the fans, I expected a public backing for him. The fans don’t decide who the team’s captain is, you do! (…or at least you did). Stripping him of the captaincy was not necessary and it won’t have happened in most teams. Finally, I feel you should have pushed for a right full-back rather than a centre-back. The club already has Chambers, Holding, Sokratis, Mavropanos and…Mustafi. It’s not a stellar list but signing David Luiz made it so much worse. He’s not a good defender. He never has been. Can’t organize anyone to defend either. I personally feel he’s the reason you got the sack.

Mr Emery, you are a good coach…and I don’t care what anyone says. They will talk about your ‘ebening’ English but we have seen Anceloti win the league title (with Chelsea in 2010) without knowing much English either. They’ll talk about tactics but I saw Sevilla play Liverpool in the 2017 Europa League final. I’m sure of one thing; you will bounce back and in grand style.

I just wish Arsenal was the launch-pad…because it would have been worth it.