A Nigerian pilot, Arinze Odira has called on Davido to put his accusers his jail.

Recall that 2 ladies, Susan and Helen made a video which soon went viral accusing the singer of impregnating one of them.

In reaction, Davido promised to find them and send them to jail. However, the two soon made a video apologizing to the singer as the confessed it was a prank.

Davido hasn’t said anything on the matter since then but a Nigerian pilot wrote to him on Twitter;

You obviously don’t know who I am but I have a favour to ask thee:

“You see these two ladies, please make sure they visit Ikoyi prison. Do it for the men, for the culture. Take this as your contribution towards putting an end to false accusations.” 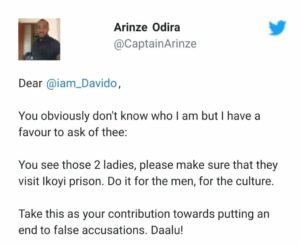 “My Music Is Smoother Than Your Life” – Music Executive, Soso Soberekon Slams Follower

Comfirmed: Davido is yet to be a Billionaire