Award-winning Nigerian actress, Genevieve Nnaji took to her Instagram to encourage boys to rise above the stereotype.

She shared an image that read “ ‘boys will be boys’ claim is a form of objectification and don’t reduce men to animals who don’t know right from wrong.

“Brothers, you can rise above the stereotype, love y’all” she wrote as caption. 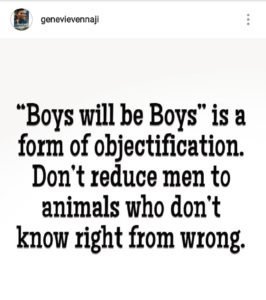 An Instagram user went ahead to say mothers should be blamed for inculcating this mentality in boy child and eventually grows up with the mentality which then becomes hard to change.

Genevieve Nnaji replied him telling him ‘when you’re grown you stop blaming your parents for many things.”

“Unfortunately, Y’all mothers are guilty of this; steady inculcating this mentality in the boy child. He eventually grows up with this mentality and then, it’s hard to change him”

“When you’re grown, you stop blaming your parents for a lot of things. That’s what being an adult is.

They acted based on their level of understanding. We are meant to be better than them and our children, better than us. There are so many things we were taught but dropped along the way; and a lot we figured out on our own. One can do better.

You just need to be willing. No excuses.” She wrote kindly.

Genevieve who was a speaker at the London School of Economics Africa Summit said feminism is all about human rights for her.

“My own feminism is just human rights. I’m a woman who has rights to her own choices, I can do whatever I want whenever I want. It’s just that simple if I were a man it would be the same thing. At the end of the day I was born alone, I’m going to die alone, I breathe alone. So I definitely have the right to how I want to live my life,” she said.