This is another celebration in the Nigeria entertainment industry.

We were still in awe of Helen Paul bagging a PhD when the Chairman of the five star group announced the good news.

Emeka Okonkwo, popularly known as E-money announced that he has just received a honorary doctorate degree in Business management and corporate governance.

The excited business man took to his Instagram to celebrate this great news, “To God be the glory. I have received a honorary doctorate degree in Business Management and Corporate Governance at an event held at the University of Lagos.

“I’m joined here by the incoming deputy governor of Lagos (an influential politician) also bagged a doctorate degree. Congratulations to all honourees!”

Pictures From The Event: 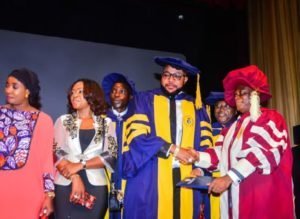 E-money is popularly known for his philanthropism and lavishing of money.

He has made headline in the entertainment news several times concerning his enormous wealth. Making people guess his source of money apart from his shipping business and 5 Star Group music label.

On his birthday, E-money gifted Toyota cars out. His net worth is estimated at 1.5 billion naira.

His Instagram posts are filled with pictures of his fleeting cars, expensive wristwatches and expensive things he owns.

E-money is the younger brother of the “Limpopo” crooner KCEE who is the most famous artist of the 5 star music group.

Now, with an added achievement to his cap, we wonder what the billionaire would be up to.

E-money gifts car gifts to his staff on his birthday

Rape is the only crime the victim becomes the accused – Kcee says, Shares tips on getting a woman’s consent