Shortly after Nollywood actress, Etinosa spoke for skin bleaching and announced her intention to start bleaching this 2020, a video of Apostle Suleman speaking against bleaching surfaced online.

According to the pastor, bleaching is wrong, he also mentioned the side effects of skin bleaching.

Reacting to the video, Etinosa made a post saying the kingdom of God has nothing against bleaching. She also alleged that Apostle Suleman’s side piece is into bleaching.

However, in new development, the actress has now taken to Instagram to apologize to the pastor. She wrote that it was an “expensive joke blown out of proportion.” She also explained she wasn’t referring to the pastor. 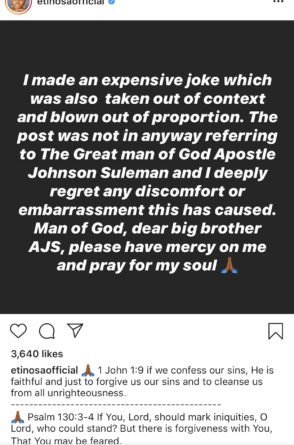 Also in recent news, the actress is now officially an ambassador for Grerivian cosmetics. In her video for skin bleaching, she announced she’s looking for a brand she could work with and the CEO of Grerivian cosmetics reached out to her.

Female Corps Member Narrates Her Experience With A Pervert In Onitsha