Social media evangelist, Victor Edet has taken to Facebook to call out Pastor E.A Adeboye‘s son, Leke for dressing like a ‘gangster.’

According to the controversial evangelist, it is wrong for a pastor to wear his face cap backwards.

”I was shocked and short of words after seeing this picture. How can a pastor be wearing a face cap this way? God of mercy, what is the church turning into? Leke Adeboye should be cautioned seriously and should be called to order. You can’t be a pastor and be dressing like a gangster.” 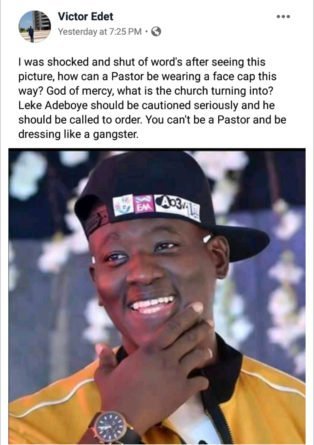