Ex BBNaija housemate, Tuoyo Ideh who is a fitness coach was trolled by some followers after sharing a video of himself in a gym.

The follower identified as @Xfranky22 on Instagram slammed the ex housemate for going back to gym like ‘Kemen’ instead of creating content and source for finance.

In reply, the fitness coach asked him what makes him sure Kemen isn’t happy where he is. 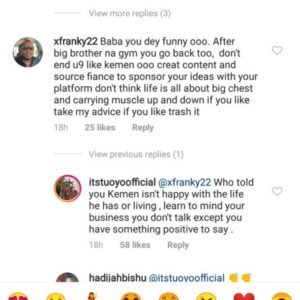 Another follower slammed him saying he tries too hard to be sexy and trolled him for how he danced at the last BBNaija party.

Tuoyo in response cursed her, praying she would be a follower through her life. 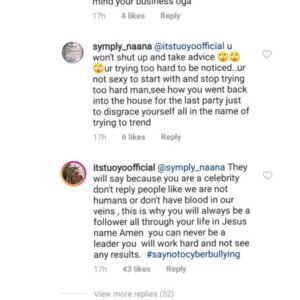 BBNaija: “The N25million Jeep Given To Mercy Is Not Fine”- Daddy Freeze

BBNaija: Alex Responds After She Was Accused Of Mocking A Housemate