With the 2019 general election a few weeks away, we at IDonSabi decided to give you a breakdown and profile of some popular presidential candidates that worked with Ex-Pres. Olusegun Obasanjo during his 8 years in power.

Obasanjo ruled Nigeria from 1999 to 2007, the longest since the emergence of Democracy.

Below is a list of 2019 Presidential Candidates that worked with Obasanjo:

Topping the list is the Presidential Candidate of the Peoples Democratic Party, Atiku Abubakar, he had the closest relationship with the ex-president ( not that it was so good) owing to the fact that he was the second in command to Olusegun Obasanjo between 1999 to 2007.

Prior to becoming the Vice President, Atiku Abubakar had the desire to become president but lost the bid to late MKO Abiola.

After stepping down as vice Vice President, the ambition to become the president of the country was still in Atiku but owing to some challenges he faced especially from his former boss, he was unable to achieve his aim.

Well, he would be contesting once again in 2019 and has mended the broken fence between himself and the ex-president.

He is one of the most experienced candidates running for the highest post in the country under Social Democratic Party SDP.

And he served as the Minister of Corporation and Integration in Africa under Olusegun Obasanjo and as Minister of Information and National Orientation.

He was also a Political Adviser to Obasanjo till 2006. 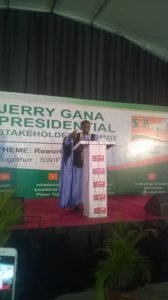 She is the presidential candidate of the Allied Congress Party of Nigeria.

Between 2005 and 2007, She served as the Minister of Solid Minerals and then as m Minister of Education during the second-term presidency of Olusegun Obasanjo.

She plans to help 80 million Nigerians out of plans. Opinion: Why No Nigerian Should Fight Over Any Politician