Malaysia-based Nigerian, Hushpuppi Ray popularly known for his flamboyant lifestyle blasts Timaya after he made a comment about celebrities wearing fake outfits.

The media personality accused the singer of being a hypocrite and stated that he has no right to call anybody out for wearing fake outfit.

He also mentioned how Timaya and Phyno dissed him in the hit single, ‘Telli Person’ released in 2017 after he (Hushpuppi) criticized celebrities wearing fake watches.

“One thing I am sure that is worse than wearing fake watches is being an hypocrite. 3 years ago I said something about celebs who flaunt fake watches and this are the same people who made song to abuse me. Now everyone who was against me then is now a fake watch Busta ?.

“I believe you are not in the position to accuse anyone of wearing fake except you wanna prove you are a blatant hypocrite. Keep the same energy from 3 years ago,”  he wrote partly. 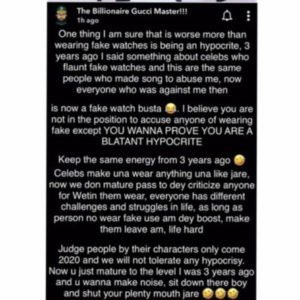