The people who demolished the houses are allegedly thugs sent by the Federal Government.

In the video the film director made of one the affected people, the lady who decided not to show her face talked about their current helplessness and begged for help from Nigerians.

She explained that she was rough handled while trying to stop them.

She also revealed that her father and others around the neighborhood had spent time in jail all because of this issue. 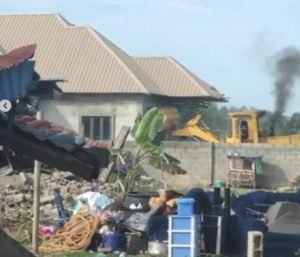 As at the time the video was made, houses were still being demolished around the area.

Dami Taiwo shared the videos of the area with homes demolished to the ground.

“Please listen to the video carefully..

“This is the current situation of Fowoseje community, Lakowe Ibeju-Lekki Lagos. Some thugs allegedly sent by the government are demolishing people’s houses and rendering lots of them homeless. This is their sweat and what they’ve worked hard for most of their lives, and without any compensation, it’s been destroyed right in front of them.

“Please, these people need our help by you just reposting and tagging anyone who can help publicize the situation till it reaches the federal government!

“Remember, this can happen to anybody.. your voice can help the situation beyond your imagination! Thank you ??”

They Have Volunteered Useful Information – EFCC speaks about Naira Marley, Zlatan others Arrest