“Bitterness is a Cancer – it eats up the host.
It doesn’t do anything to the object of it’s displeasure.”

When in 2006 you made a humbling entrant on the big Nigerian movie industry, you were received with expectations that your career held infinite promises, and you were going to be a significant reference point and success story to aspiring younger girls coming behind you. I must confess, you have disappointed a lot of us that believed you held promises, and you have beyond doubt faired extremely poorly too as a role model.

A simple fact check suggests that you have thrived more for internet sensationalism and controversies than you have at any point in your less than twenty years of career, that apparently held promises but which you murdered before it even took flight. Thanks to your apparent character stink.

You now reek of overt paranoia and covert bitterness, that you’ve now turned yourself into a butt of joke at bear palours, market square, campus hostels, amongst your colleagues, fans and Nigerians.

Like the proverbial insane person dancing in the market-square, where all onlookers are entertained watching on, but in real sense no one wishes to have the insane person as a relative.

Darling Tonto, people fall in and out of love everyday for numerous reasons including irreconcilable differences, incompatibility and mismatch. These things are part of life.

One lesson I consider pivotal for you to learn as a divorced single mum, is that, in cases of a fallout like this, rather than attacking your erstwhile partner, learn to confront issues.

You should be logically focused at underpinning circumstances that caused the rift between you two, rather than come to the public to demonize Olakunle Oladunni Churchill; while you try to smell like a rose. Healthy minds confronts situations; unhealthy, dysfunctional and bitter minds attack people.
Like you have been doing all along!

More often than not, you leave informed and deciphering minds like mine, wondering, if you assume that all internet-savvy Nigerians are as gullible and unintelligent as you’re (or as you’ve proven to be).

Actually, only your unsuspecting and uninformed fans scoop your lies without subjecting them to scrutiny.

Well, congratulations on your new relationship, and weldon with your acclaimed ‘celibacy’ too.

But really, if you have moved on like you try to make the world believe, why engage in a ‘reverse-psychology fight?’ When you come public, assassinating the personality of your ex-lover, by calling informing the world that he wasn’t man enough to pleasure a woman, it seem to me you’re deliberately attempting to discredit him, by making other women uninterested in him, thereby giving you a leeway to return to him when you deem fit.

Apparently, you haven’t gotten over Churchill!
He was a 40 seconds rider, a carrier of STIs, yet, you hung in, on the same joystick for years, until things fell apart.

Howbeit, premature ejaculation isn’t even a terminal disease; if it were true he suffered that, he could get medical help after all. So, whatever it was you tried to achieve with that, was busted. Better luck next time.

You might also need to disembark from your disillusioned ivory tower, to realize that you were not worth anyone’s lies.

Your Ex-husband had a reputable family background, and it appeared, you were disillusioned thinking you could latch on that goodwill.

After Churchill lost his biological father about 22 years ago, he was raised into the esteemed gentleman he currently is today. It appeared upon realizing you turned out disappointed when you realized you couldn’t use the name ‘OBASANJO’ ; but your ex-husband was Olakunle Oladunni Churchill.

That didn’t sit down well with you! Realizing you might not be digging a goldmyne from the arrangement, you already started to show yourself a way out of the relationship.

The (only) existing Court Order over Andre’s custody; was dated *11th of October 2017 with suit no. FCT/CC/DU/CV/176/2017*. The court ruled that all documents of your son must bear the surname of your ex-husband, Olakunle by right, while the international passport of your son must be kept in the bank, and must not be released except with written consent of both parent.
Yet, you fraudulently, go behind court orders to secure a new passport, with a change of name, with Andre bearing your surname.

You denied the father of your son access to his child, you also instructed his school not to give his father access to him.

Having done that, who would expect the man to keep paying for tuition of a child you have blocked him from seeing.

How would Churchill trust that if he kept sending you money for little Andre’s fees, you were not going to use his money to keep funding your glamorised lifestyle of drug abuse? Since you’re heavy on weed.

Recently, you sold a Toyota Prado belonging to your darling alleged ‘Yahoo Yahoo’ ex-husband, for 22million naira; why couldn’t you take Andre’s upkeep money from the pool.

Enough said already, it is just important you remember, that you can only protect three year old Andre from his father. When he stops being an infant years on, and he grows into an opinionated adult, he will know the truth about how you maligned his father from his childhood, thanks to your over bloated ego.

And all the venoms you have littered the social media space with, Andre will grow to see through the prowling deceit.

Bitterness is like taking a poison and hoping your enemy would die. Truth is end up hurting your own self. Actually, you don’t have an enemy in Churchill. The man has moved on, you should too.

And yes, you should consider honey on your diet menu lately, it helps deal with bitterness and you reek with it. 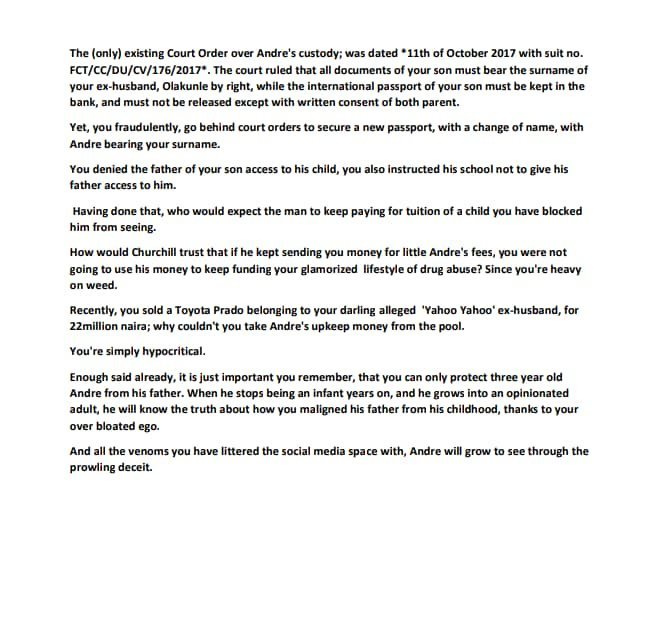 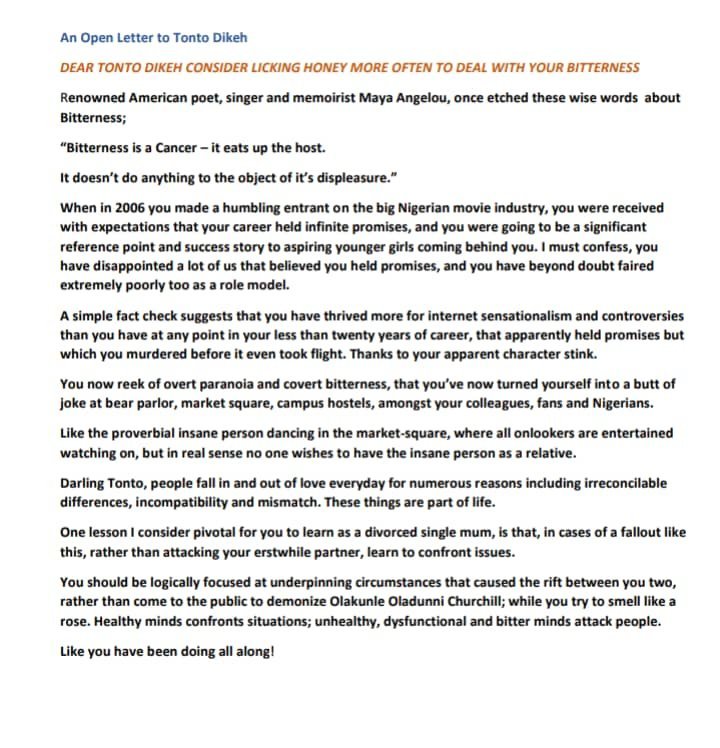 “At My Age In The Kingdom, Little Witches Still Have The Mind To Press My Chest”- Tonto Dikeh Shares Details Of Her Nightmare