– He is the second person to win the award

Former Min. of Agriculture and the current Pres. of the African Development Bank ADB, Akinwunmi Adeshina has made Nigeria and Africa proud with his latest achievement once again.

Akinwunmi Adeshina was in Seoul, South Korea capital on Saturday, where he won world food prize known as the Sunhak Peace Award.

The Former Min. of Agriculture is the second individual to win the award.

Akinwunmi Adeshina in the course of celebrating his latest achievement took to his Social Media page as he disclosed that it is a call to do more especially in Africa.

He went on to applaud Ambassador Kenneth Quinn, President of the World Food Prize Foundation, for joining him in the Asian country. 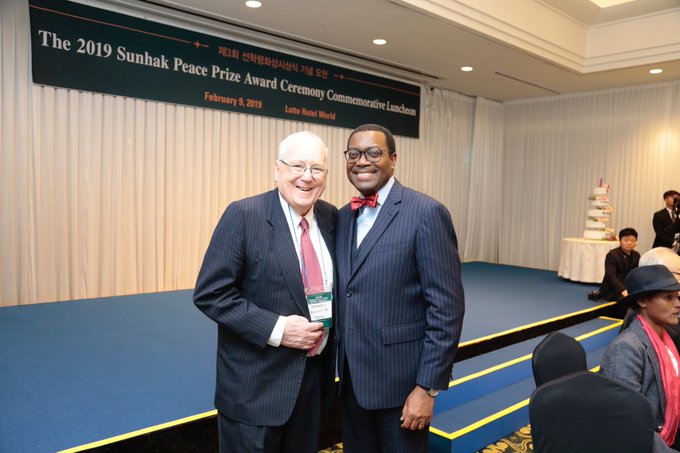 It was a huge honour to receive the Sunhak Peace Prize yesterday in Seoul, Korea! It is a call to do more for the world, and especially Africa. By God’s grace, I will

Adeshina Akinwunmi was the Nigerian Min. of Agriculture between the year 2010 to 2015 under the Peoples Democratic Party PDP led Government by Goodluck Ebele Jonathan.

Following his achievement in the Agricultural sector in Nigeria, he was soon made the President of the African Development Bank and he also celebrated his 59th birthday this month, 6th of February.