A lady identified as @ranahasse on Twitter has shared her brother’s reaction after hearing their parents having sex. This video has gone viral as the boy in question bursted in tears explaining the situation to his sister.

In the video, the young boy said her sister would be dead “if she heard what he heard.” He had a breakdown explaining to his sister. However, his sister stated that she soon explained things to him over dinner.

”My brother heard my parents having sex and had a complete break down while telling me about it. For the record took my lil drama king out for dinner n gave him the talk lmao hes all good.” 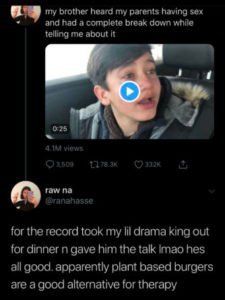 iPhone 11 Design Is Causing Trypophobia Trigger For Some