This is the moment the wife of Ogun State Governor, Olufunso Amosun held his agbada and calmed him down from going to attack Ex-Governor Rauf Aregbesola who shaded him during APC campaign rally in Ogun State.

Recall that after the internal APC crisis in Ogun State, Governor Ibikunle Amosun created another party called Allied People’s Movement (APM) that he is supporting for governorship in the state while still supporting APC at the National level. 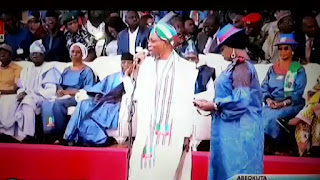 In the video which has now gone viral, the viciously angry Amosun was seen walking angrily towards Aregbesola to attack him but his wife followed suit while pulling at his agbada and speaking to him to come back.

Governor Amosun who seemed very fond of his wife, turned aside from his intended attack on Aregbesola and went back to his seat.

Watch the dramatic moment below:

Amosun's wife restrained him (by pulling his Agbada) from beating Aregbesola up in from of TV. ??? #PMBInOgun pic.twitter.com/3oZaD1iypo

True love. I like his wife though.
She carries herself well…?

The end of the Asiwaju hegemony is near! The nail in the coffin will come after defeat of the incompetent Buhari administration.

As he dey talk to bàbà sef, he no answer am… I loved what Buhari did there

And they say this next level team mean well ??? stomach infrastructure politics ?

Please help us translate what Aregbesola is saying

He said come d day of governorship election you all should vote for APC.the statement which didn't go down well with the governor bcoz his preferred candidate is not in APC but in APM another party d gov created.
D gov only want Buhari at presidency

Davido says, I’m not a party man as he lists names of contestants he is supporting

Allegedly sick Diezani Allison-Madueke spotted in a hoodie on the streets of London! [PHOTOS]