Remember former Governor of Oyo State, Senator Rasheed Adewolu Ladoja? His daughter Grace Ladoja has been blasted by fans for the dress she wore.

Grace wore a high-slit yellow gown with the top barely covering her boobs. Considering she is African and daughter of a Senator who is also an Oba, it is no surprise that people didn’t let the picture slip by.

There were reactions aplenty with several IG handlers saying it was wrong for an African lady to expose her body in such manner. 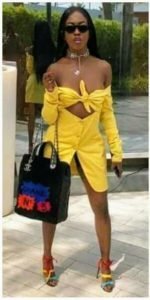 Grace Ladoja who is also manager to Skepta recently won an MBE award. Although it is an award given by Queen Elizabeth, it was handed out to her by the Prince of Wales. The award is given out to people who have played major contributors to the arts and sciences as well as public service outside the civil service.

This is what she had to say after obtaining the award:

“Today I received an MBE from HRH The Prince of Wales and I’m happy and emotional because the 16 year old me would now have someone to identify with. Today my mum would have been so proud, the sacrifices she made and the struggle we went through was character building and gave me so much drive, focus and strength to keep pushing forward… “

She was one of 452 recipients of the prestigious award. The music executive is one of the fastest rising music executives and is regarded as an important personality in the grime scene.

She is well deserving of the award having ushered Skepta into limelight. Skepta has gone on to become of the biggest talents in the UK right now earning a feature in Wizkid’s – bad energy – and so many other songs.

The Princess is also a representative of brands such as Barbie, FKA Twigs and so many others.

Wizkid Might Just Be The Highest Charging Nigerian Artiste

Victoria Kimani Responds To Allegation Of Sleeping With Wizkid