The 20-year-old rapper whose real name is Bashar Barakah Jackson was shot multiple times by 2 unknown men in hoodies who invaded his rented apartment in Hollywood Hills.

He was rushed to the hospital where he was later pronounced dead. This news has been a shock to the entertainment industry including Nigeria’s.

Reacting to the news, Burna Boy revealed he is currently in shock as he recently spoke to him a few days before the horrific incident.

“Spoke to the realpopsmoke on Facetime just a few days ago. He really wanted me to take him to Nigeria. I’m in real shock right now. R.I.P this world is unbelievable,” he wrote on social media. 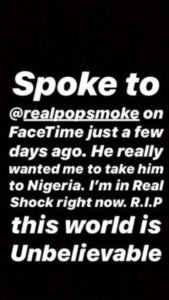