Some time ago, this picture was a subject of contention on social media.

So how many watermelons do you see? 8? 6? 5? Are you sure, now look again. What if the cut pieces where actually quarters and not halves, how would that affect your answer? Most people don’t actually think about this.

The most common answers are 5, 6 and 8. In this post, we’ll be exploring why it could be either of these numbers.

Let’s start with the highest number. 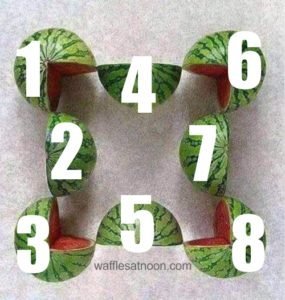 Some people have given the answer as 8.  The logic behind this is,  the question wasn’t specific as to how many “whole watermelons” there are. This means that there are no need for additions. So every piece is counted as a single piec of watermelon. Which equals 8, 8 partial melons.

The Answer Could be 6. 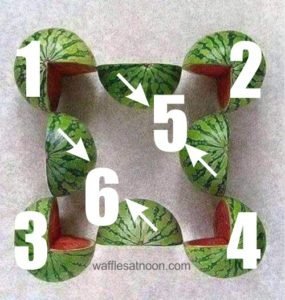 Now, the logic behind this will be the number of watermelons it would take to create the image we saw.  That would be six. The four halves would make two watermelons when put together. Then you have the four, three quatre melons. Then all together we’ll have six watermelons.

The Answer Could Also be Five 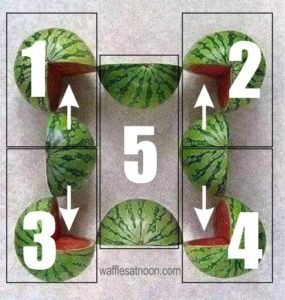 Here two of the half watermelons would be added to the four three quatre melons making each of them whole. Then the two half that’s left when joined together would become one. Therefore all together we would have 5 watermelons.

The Answer Could be Four

Now imagine the incomplete melons were actually quarters and not halves. just as some people have thought. So one quatre melon added to the three quatre melon would make one melon. When we do that for all the quatres and three quatres, we’ll have four melons in the end.

So which is the right answer? Well, it depends on where you’re standing or seating. Sometimes there are more answers than questions and this might just be one of those times.

What do you think the right answer should be, let’s hear your thoughts in the comment section below.