Comedian and actress, Etinosa have joined a host of other top celebrities in throwing a dig at Nollywood star, Tonto Dikeh, over her comments about her ex.

The Nollywood actress had revealed in an interview that she caught her ex-husband, Olakunle Churchill during the process of Yahoo ritual.

Tonto Dikeh revealed that she saw her ex putting on red cloth around his waist and sitting in between red candles with his laptop. This she said led to their first fight.

This claim has elicited mixed reactions from different celebrities.

Comedian, Etinosa in a post on her Instagram page, showed herself squatting in front of red piece of cloth. Etinosa wrote on the picture:

‘Why this photographer use red cloth sef? i come resemble Churchill’

This is believed to be a dig at Tonto Dikeh’s ex-husband. 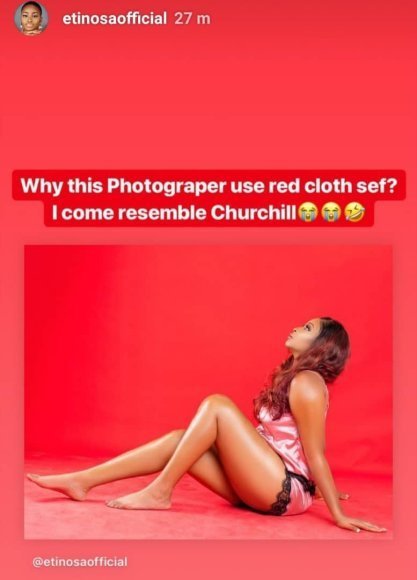 Tonto Dikeh Slams Media for Portraying Her as Tribalistic