Grammy-nominated artiste, Burna Boy revealed in new post that he could have been in the army but he doesn’t like taking orders.

The singer shared a photo showing off his aiming and shooting skills then bragged about how he could have been the number one shooter for the army.

”Just to let you know, I could have been the #1 shooter for the army but I don’t like taking orders,” he wrote matter-of-factly. 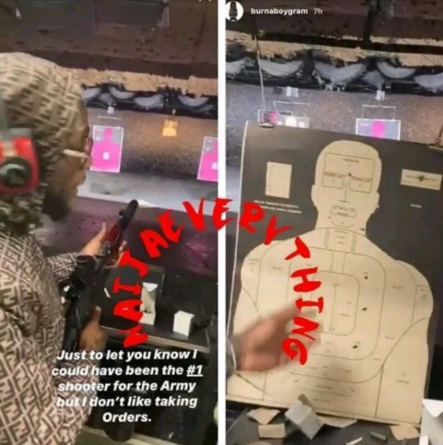 The singer was also in the news recently after he lost the Grammy award to Angélique Kidjo.

Meanwhile, it was a proud moment for him as Angélique Kidjo dedicated her award to him.

Following the Grammy awards, American model, Naomi Campbell wrote the organizers arguing that Burna Boy should have won. She also advised that the Afrobeats genre should be added as a category on the Grammy nomination list.

“Who Are Those?” – Brymo Shades Wizkid, Burna Boy and Davido