Senior pastor of Commonwealth of Zion Assembly (COZA), Biodun Fatoyinbo was accused by Busola Dakola of raping her.

This isn’t the first time the pastor would be accused of rape and molestation. In 2013, a woman named Ese Walters revealed how she was also raped by the COZA pastor.

Meanwhile, the pastor has released a statement denying all allegations against him.

He said they are set out to destroy his name and church and he’s never had any relationship with Busola Dakolo asides pastoral duties. They are trying to ‘ruin my reputation and bring down the church,’ he said. “I’ve never raped before, not even as an unbeliever.”

Read: “He told me I was going to be his wife” – Stefflon Don speaks on when she first met Burna Boy

The pastor further stated that individuals behind the false allegations will be sued. He also said he won’t be surprised to see more of such allegations.

See His Full Statement Below: 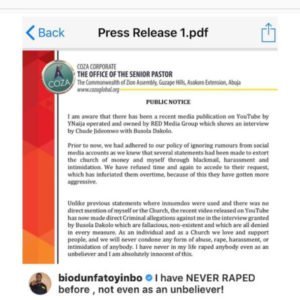 CAN Finally Reacts To Sexual Allegations Against Pastor Fatoyinbo