Nigerian actress, Susan Peters has made a clarification of her post about women marrying 2 husbands.

The actress made a picture post that reads; “Women should be allowed to have two husbands in case Thunder fires one.” However, some blogs have reported her post saying the actress wants women to he allowed to marry 2 husbands. 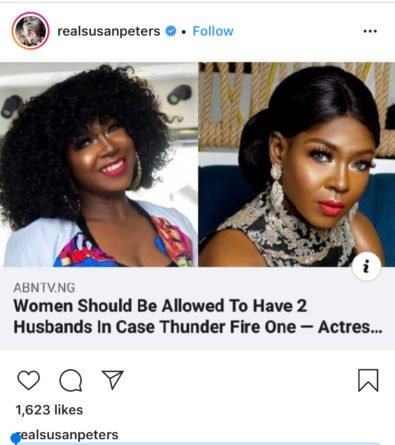 Reacting to the blog reports, she wrote;

“Una do well with this caption o, what I said versus what you people wrote because u want to drag traffic to your blogs . Please be careful, read what I wrote on that post . And i said WILL LIFE BE BETTER? DOES THAT MEAN I SAID WOMEN SHOULD MARRY TWO HUSBANDS?

“KEY BOARD WARRIORS MAKE UNA FREE ME !!! See me see local trouble, please read what I wrote on the actual post before using my name to sell news. Be warned!!!”