She accused the entrepreneur of being a troll and promised to post dirty facts about her soon. “Just be careful I am watching you closely,” she wrote. 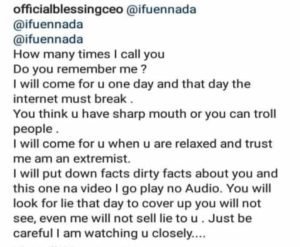 Ifu Ennada responded that she doesn’t even  she exists and she would really like her to post the videos she has.

The ex BBNaija was recently accused of leaking a chat between her and Alex and this has caused a lot of reactions online.

Referencing this in her response to Blessing Okoro, she wrote:

“I made a mistake and now everybody wants to ride on the wave. Please post the gist in Jesus name. And while you’re at it, make sure it’s not audio gist.” 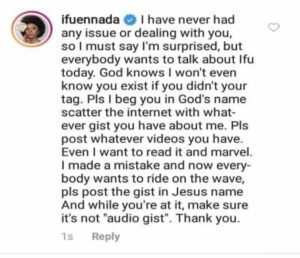 Toyin Lawani Reveals Who She Is Supporting In BBNaija 2019