– According to the opposition party, the Former IGP surrendered his exalted office to the whims and caprices of politicians

Following the appointment of the new and acting Inspector General of Police, Mohammed Abubakar Adamu, the Peoples Democratic Party PDP has reacted to the retirement of Idris Ibrahim.

The PDP claimed the former IGP easily surrendered his position as a chief security of the country and instead fell to the whims and caprices of politicians, who were close to the presidency.

PDP in a statement via their twitter handle said, ‘Ibrahim Idris will be remembered as the only IGP in our political history, who surrendered the responsibilities of his exalted office to the whims and caprices of politicians who share courtesies with the Presidency.’

The Opposition Party further claimed the the former IGP made the police lost it professionalism by participating in partisan politics.

According to the statement, it read that “The party berates the outgoing IGP Ibrahim Idris, for a shameful and partisan tenure, which destroyed professionalism in the compromised the lives & security of Nigerians, adding that he must be held accountable for all the atrocities he committed while in office.” 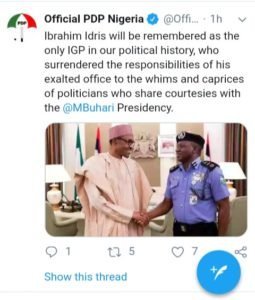 However, the PDP further reached out to the new Inspector General Of Police, Mohammed Abubakar Adamu by urging him to re-engineer the Nigeria police force.

One of the ways to do so is ”by immediately setting up the process of re-orientating & insulating the Force from partisan politics, while subjecting it to the tenets of democracy &the rule of law.”

Finally, the PDP advised the new IGP to works towards means of preventing rigging in the forthcoming election.

IGP Mohammed Abubakar Adamu is still only acting in the new post.