Nigerian doctor, Dr. Anenga has taken to Twitter to plea that his wife be allowed to take care of their kids if it ever happens that she kills him.

This is coming after Maryam Sanda was sentenced to death by hanging by the Federal Capital Territory (FCT) High Court after being found guilty for the murder of her husband, Biliyaminu Bello in 2017.

This death sentence has sparked a conversation of who will take care of their children.

Dr. Anenga then took to Twitter saying although he knows his wife would never kill him but if it happens, she should be allowed to live and take care of his kids.

“I know my wife will never kill me. But if for any reason this happens, let her be allowed to live and take care of my children.

“This is me Dr Anenga Ushakuma Michael writing this, and I want this tweet to be admissible in court as evidence.” 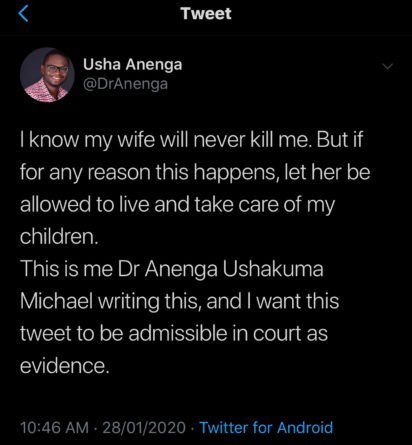 However, people have educated him on how homicide works.

This would be inadmissible in evidence and won't contribute anything to "your wife" being free. An agreement or acquiescence to a crime doesn't remove the criminal liability and such agreement is deemed void ab initio

You dont decide the outcome of a criminal case for Government. ?

God forbid this happens, but if it does happen, it will be her against the state. Your life is that if the state and not yours… There are written laws to this effect, so sorry, this will not hold as evidence…

You are an ignorant Dr I am sorry… Homicide is a crime against the state not the victim. You have just deceived yourself but please don't mislead others.

Nigerian Singer, ‘Superior Emma’ Dies After Armed Robbers Forced Him To Drink ‘Sniper’, Threw Him Inside A Lagoon