Popular comedian, Helen Paul has advised people who currently don’t have a job not to let their pride stop them from working under people, to take any job they can find.

Helen Paul also warned that anyone who is too proud to work under anyone should never call her to borrow money because she also works under people. 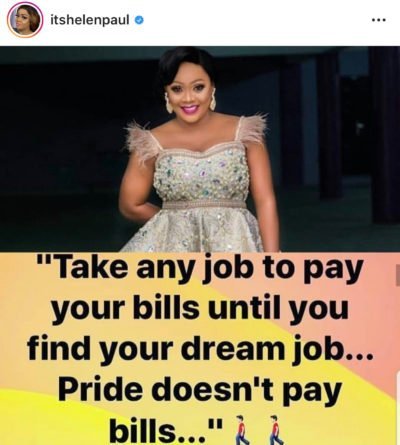 “”I don’t wanna work under anyone”
Please don’t call me to borrow money, because I am working under many people.

”So if you don’t want to work UNDER anyone, Don’t ask me to borrow you money
Do you UNDERstand????”

After Traveling Hours For Interview, Company Says Man Was Called By Error

AY Explains Why It’s Important For Entertainers To Show Off